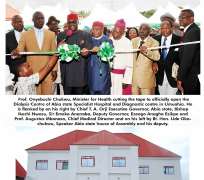 Before the inception of the administration of Governor Theodore Orji, Abia state health sector suffered untold neglect. Access to primary, secondary, and tertiary health care was difficult. All the state-owned health care centers were not only understaffed, but staff morale was at it lowest ebb. Cost of drugs and other medical services was beyond the reach of the ordinary Abians. Consequently, maternal and child health indices in the state was embarrassingly poor compared with the national statistics.

However the depth of the rot in the health sector did not intimidate Governor Theodore Orji who immediately rolled up his sleeves and went to work. A strong believer in the dictum that health is wealth, Ochendo as he is fondly called decided to make affordable healthcare a cardinal focus of his people oriented administration. Today, given the first class facilities he has provided at all levels, he has completely transformed Abia state into a veritable destination for medical tourism as well as given succor to the masses of his grateful citizenry.

Hence Governor Theodore Orji has excellently distinguished himself in empowering Abians through massive provision of health services as follows.

· Construction and equipment of more than 250 health centers in the 291 political wards in the state. Each of the health facilities has, in compliance with the millennium Development Goals. MDG, been provided with generators, a borehole and a tricycle to convey patients to and fro the health centers.

· In addition, community ambulances have been provided In all the local government areas in the state such that a patient who cannot be helped at the primary care level could easily be transported to the nearest secondary or tertiary health care centre.

· Operation of free maternal services for all pregnant mothers I the state up to six weeks.

· Similarly, a functional secondary health care system is in place in each of the 17 local government areas. At present, over 10 hospital projects are ongoing in the state. Services at Amachahra Hospital in Umuahia South Local Government have improved. In addition, a storey building has been constructed for house officers alongside the two-storey building complex meant for resident doctors. Besides renovated the theatre, work has been completed at the accident and emergency units of the hospital. The General Hospital in Ohafia, Okikpe and Arochukwu are being expanded. The governor is building a 100-bed hospital in Arochukwu, just as Obingwa Local government which never had a hospital is now boasting of a functional hospital. The 100-bed hospital is being replicated in all the 17 LGAs in the state.

· The highpoint of the governor's intervention in the health sector is at the tertiary level where, Abia specialist Hospital and Diagnostic centre built in the record time by Governor Theodore Orji, boasts of worlds-class and state –of –the-art equipment for diagnosis and treatment. The state government entered into partnership with Me-Cure Health services of India in the provision of the facility and manpower training. Today, many Nigerians who would have been flown abroad for emergency medical treatment are patronizing the Abia Diagnostic centers located in Umuahia and Abia state university Teaching Hospital Aba. The state is also partnering pharmaceutical companies such as Neimeth and Emzor to provide affordable and quality drugs to it citizens

· In addition, the state has strengthened its community health insurance, which it developed in collaboration with the national Health Insurance scheme. Three communities in the state-Ohafia,Umuahia North and Osisioma are in the pilot programme. The aim is to make people participate and make health cheaper and drugs available

· Upgrading of the Amachara General Hospital as part of Abia state teaching hospital and diagnostic centre which has secured accreditation from the medical Examination Board for training of House Officers.

· Construction and equipment of a functional chest clinic in partnership with the Agbami partners of Chevron oil field.

· Organization of series of medical mission under the office of Her Excellency, involving screening of communicable diseases, treatment and control of breast cancer, eye diseases and surgeries.

· Partnering with MTN foundations in the MTN yellow doctors programme.

· Reconstruction of the school of Health Technology, Aba

· Ensuring the continued accreditation of the Abia state University Medical and Dental Council of Nigeria.

· The provision of Health Insurance Scheme Services for the state workers.

· Provision of modern and highly equipped Eye centre. From these and other indications, it is obvious that Governor Theodore Orji has blazed a trial in the health sector. Today, history will once again be made as the Honorable Minister of Health, Prof. Onyebuchi Chukwu, joins Abians to Inaugurate its first ever Dialysis Centre. Henceforth, kidney patients from Abia and environs can now heave a sigh of relief as they no longer need to travel to distant lands. The Abia Dialysis Centre has a record seven machines with special provision for different categories of persons including HIV and Tuberculosis patients.

All these facilities have been painstakingly provided by one man, the Ochendo of Abia state, whose mission of giving a better life to his people is unprecedented. Governor Orji has been able to achieve all these phenomenal projects because he first made Abia one of the most secure states in the Nation, a feat which earned him international awards as Pillar of Security.

On a memorable day like this, we salute the kind-hearted gentleman, the crown prince of Ibeku ancient kingdom, the icon of Democracy , His Excellency, Chief Dr. Sir Theodore Ahamefula Orji, Ochendo Global, the distinguished Ambassador of Health care , whose vision and tenacity of purpose has made this monumental achievement possible.