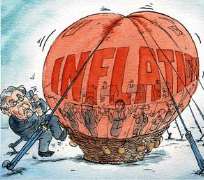 Economic pundits recently predicted that Britain is about to be overwhelmed by an ever rising mountain of debts. Right now, whether Britons vote Conservative, Labour, Liberal, UKIP or Independent or whether they vote for no party at all during the coming 2015 elections will not be important in this issue. None of these parties is likely to be able to do much, at this time and given the prevailing circumstances, to stop the drift.

It is common knowledge that even before the Coalition formed the current government two and a half years ago, Britain was already hugely trapped in debt. The preceeding Labour government had left the country sinking with a debt that ran into billions of pounds. When they came to power, the Coalition spent its first two years frantically trying to shore up the nation's finances. The coalition government embarked on an 'austerity budget'. Britons experienced tax hikes. They saw 'cuts' which affected even the NHS.

It may sound incredible. But the truth is that if we take a critical look at the nation's finances as a whole, it clearly shows that the Coalition is not really cutting down on anything. State spending is going up. National debt is going up. Interest payments are going up. By the next general election in 2015, the national debt is estimated to stand at a whopping £1.4 trillion, according to ukpublicspending.co.uk

It is obvious that Britain's public finances are in a great mess. Anyone can see that. And to some extent, some politicians will admit it. Add that to the financial, personal and private debts of Britons and an even darker picture emerges. Compared to the size of the economy, Britain is now one of the most heavily indebted countries in the Western world. This is official. The nation's total debts stand at more than 500% what its entire economy is worth. In comparison, that is more debt than Italy, Portugal and Spain, and almost twice as much debt as Greece.These are the four Western countries that are already in the front seat of financial crisis. Britain has not joined the front seat debt-countries because its economy has not yet collapsed. But, with what economic observers say they know, things will certainly not stay that way for long.

Again, it may sound incredible. But it is an established truth that the only countries that have greater debts than the UK are Japan, where the economy has stagnated for 20 years and the stock market has crashed by 75% and Ireland, where the housing market has crashed 50%, and the government has been forced to accept a bailout. According to researchers in McKinsey Global Institute, Britain's debts hugely tower above almost every other nation's.

But that is not the entire story.

When all of Britain's 'unfunded obligations' - promises the Government made on things like public sector pensions - are added up, the debts swell to 900% of the national economy. That is right. When everything is added up, Britain would owe 1000% of its entire economic worth. Yet, the nation's political leaders still like to see Britain as a world power. It will do no good to anyone if Britons decide to delude themselves. It is obvious that the nation is totally broke. A country can either pay back its debts or it cannot. And it is very clear that with the globally prevailing situations Britain cannot in any foreseeable future.

How did the country get here? After all, Britain was once the richest and most powerful nation on earth. What happened to all of the money?

The situation Britain finds itself trapped in today started on the 1st of January, 1909. The politics of Britain took a new shape on that day. It was the first time in British history that something like that was happening. The government had agreed to re-distribute taxes to support people in their old age. On that day, more than any other, the modern welfare state began in earnest in Britain.

The conditions were simple. Citizens who were aged 70 and above could claim between 2 and 5 shillings per week from the government. For the elderly citizens it sounded good. It felt good. But in actual fact, the government was not really making any serious financial commitment. The reason was that, back then, the life span expectancy of an average working man was only 48 years. Today, that would be equivalent to offering someone a pension when be has reached the ripe old age of 115! So the idea of rewarding anyone who made it to 70 with a hand-out from the public purse seemed perfectly fair. And more importantly for the government, it was cheap.

That first year, only 500,000 men qualified for a government pension. At the time, there were 10 workers for every pensioner. It was a perfectly applicable policy. Unfortunately very few politicians realised that they were setting in motion a sequence of events that would inevitably lead to the crisis Britain faces today. Interestingly, at the beginning of the 20th century, Britain still had a booming overseas Empire. The nation was yet to fight in the cripplingly expensive First World War. The economy seemed to be on a permanent upward flow. The idea that Britain could, at some point, face any kind of financial or social decline had not yet entered mainstream thinking. If the country could afford to pay for a welfare state, why should the politicians not implement it?

But there was one problem. The welfare state had started. But no one had any idea where it would stop, or whether it could actually be stopped if it became too expensive to implement. Politicians had innocently created a trap for both themselves and their constituents, and together they had stepped right into it.

After the Second World War, the welfare state system not only came to stay, it began to grow. It was seen as a major tool for 'winning the peace' and keeping the forces of socialism and fascism at bay. Politicians soon realised that welfare was not just a tool to win the peace. It was also effective for winning votes.

The understanding struck the political class across the globe from America to Japan and across Europe. What appeared like limitless economic growth and prosperity induced politicians to make a daring promise. The government promised to look after citizens 'from cradle to grave'. This single, powerful commitment became very expensive half a century later, and so was the cost of maintaining it. In just a few short years, the size of the welfare state grew, almost uncontrollably, backed by new laws. There was The Butler Act, which reformed schooling. There was The Family Allowance Act. There was The National Insurance Act. There wasThe National Health Act. The list could go on and on. The problem was that all these came with tasteless side effects. They were enormously expensive.

Everyone assumed that the nation would be able to pay for it forever. But they were wrong. Politicians found themselves totally caught in this trap. Any attempt to reduce the size of the welfare state was met with often violent resistance in the form of strikes and protests. On another level, any party trying to cut back on welfare - trying to do the sensible thing - was simply voted out of power. As an ever growing proportion of the population benefitted from the welfare state, in one way or another, the safety net could not just be pulled away. The government would forever be saddled with an expense that could only grow. And grow it did.

Since public pensions were first introduced, average life expectancy has grown from 48 to 80 yeras - a 67% increase. But the age at which Britons retire remains essentially the same. This has resulted in an estimated £5 trillion worth of pension promises the state made to its citizens - roughly five times the worth of the entire economy. No one has an idea how this will be paid. The recent attempts by the government to change the retirement age did not go down well with the people, nor did it do anything to solve the problem. As people live longer, the strain on the NHS - the demand for medication, more doctors, nurses and other staff, added to a skyrocketing cost of caring for the elderly - pushed the nation's finances to breaking point.

As state spending grew, so the cost of running the welfare system itself. For instance, the government employs half a million civil servants. To put that into perspective, during the height of the British Empire, when Britain managed a quarter of the planet, the government employed just 4,000 civil servants. It means that public spending exploded in a way no one could have imagined 100 years ago.

With the idea of welfare being such a vote-winner, no government could take the bull by the horns and cut it back. Not in any meaningful way. They could fiddle round the edges and save a few pennies here and there, but as the population grew larger and lived longer, all they could really do was sit back and let a future generation sort it out. And now it has come down to us.

In a situation like this - when you spend more than you earn - there's only one way of paying for it. That is by borrowing more money. That is bad enough. Add to that the fact that these debts also have to be serviced. This means that the country will continue to pay interest on a pile of debts that only mounts ever higher - a debt the nation will never be able to pay back. So a vicious cycle was set in motion. Politicians realised that to remain relevant in office they needed to make bigger promises, embark on bigger reforms, and ultimately borrow more and more money.

This addiction to debt spread into every corner of British society. These days, banks and businesses, and even the ordinary man on the street, all carry a great weight of debt. Debt has become normal. Want a holiday? Pay for it on credit. Want a new crowd-pleasing cut in taxes? Fund it with debt. To put it bluntly, politicians who were meant to look after public interests - acted like teenagers with their first credit card - in attempt to win votes.

If the UK had been a business or an individual, it would have been declared bankrupt by now. It would have been forced to sell its business premises or his home and would have been housed in a run-down flat long ago. Britain is broke. It has been for a long time. And very soon, this truth will really hit home to all and sundry.

To forestall a continuation of the trend, a total overhaul of the political system must be put in place. First, British people must generally be made to understand the position. They must decide for themselves if government must continue to borrow and borrow to fund the welfare system. They must decide, possibly in a referendum, whether they can shelve some of the packages in the welfare system, and which areas need to be sorted out. It is obvious that the people and their political representatives need a strong will to do what is required to shore up the national economy.

So, the politicians should begin to consult their constituents, explain to them the facts and figures involved and seek their candid opinion as to the economic future of the country. The current direction the nation is headed economically is quite worrying and politicians must begin to find a way to get back the economy on its feet.