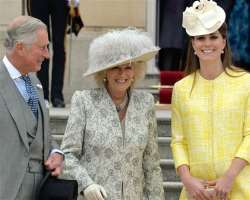 The palace revealed the news via press release at 8 p.m. local time following a hospital stay that lasted more than 14 hours at London’s St. Mary's Hospital, the same facility where Princes William and Harry were born.

The official announcement, placed on an easel outside Buckingham Palace.


The baby’s birth was to be announced to the world in a formal declaration placed in front of Buckingham Palace on an easel, the same one used to announce Prince William's birth 31 years ago. But the palace released the news to the media first; the formal notice was posted a few minutes later.

“Her Royal Highness and her child are both doing well and will remain in hospital overnight,” the statement read.

“We could not be happier,” new dad Prince William said via his spokesman. William will be spending Monday night in the hospital, his spokesman said.

The name of the baby, the palace said, will be announced “in due course.” Prince William’s parents, Prince Charles and Princess Diana, took a week to announce his name.

The infant will be third in line to the British throne, after his father and grandfather, Prince Charles. He is the first grandchild for both Prince Charles and the Middleton family.

'Both my wife and I are overjoyed at the arrival of my first grandchild,” said Prince Charles in a statement. “It is an incredibly special moment for William and Catherine and we are so thrilled for them on the birth of their baby boy. Grandparenthood is a unique moment in anyone's life, as countless kind people have told me in recent months, so I am enormously proud and happy to be a grandfather for the first time and we are eagerly looking forward to seeing the baby in the near future.”

And according to a Buckingham Pal ace spokesman, “The Queen and Duke of Edinburgh are delighted at the news.”

According to NBC News' Jim Maceda, photographers reported seeing royal vehicles at a back entrance to St. Mary’s Hospital at about 6 a.m. local time. About 90 minutes later, royal officials confirmed Duchess Kate, 31, traveled from Kensington Palace to the Lindo Wing of the hospital via car, not an ambulance.

St. Mary's Hospital is where Princess Diana gave birth to Prince William in 1982 and to his brother, Prince Harry, in 1984. The birth of William and Kate's child was overseen by a medical team that includes Marcus Setchell, 69, the Queen’s former gynecologist, and her current gynecologist, Alan Farthing.

The baby’s uncle, Prince Harry, remained at his military base in eastern England.

In England, thousands of Britons placed wagers on any possible detail related to the baby over the past several weeks. Interest around the world also surged as Kate drew closer to her due date, with many countries making arrangements to publicly celebrate the baby’s birth.

'I hope it arrives soon because I'm going on holiday,' Queen Elizabeth joked during a July 17 visit with schoolchildren.

Just days earlier while touring a children's hospice, Camilla, the Duchess of Cornwall, also spoke about her hopes that the future king or queen would arrive.

'We're all waiting at the end of the telephone,' she told the crowd.