35 senators have no Bills in 2 years despite N13b earned… 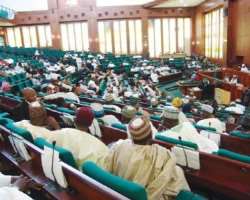 
Zamfara, Borno no single Bill
Despite receiving more than N13 billion in salaries, allowances and benefits that clearly positions members of the Nigerian Senate as the world's best paid lawmakers, at least 35 serving senators have not listed a single Bill in their name since taking office in 2011, an investigation by The Nigerian Telegraph has shown.

Between 2011 and June 2013, each senator drew about N400 million in salaries, allowances, and self-allocated bonuses, according to details of lawmakers' allowances, as well as listed earnings for federal lawmakers stipulated by the Revenue Mobilisation and Fiscal Commission (RMAFC).

But while a majority of the lawmakers have made fair efforts at delivering in their primary lawmaking duties, sponsoring at least one Bill between June 2011 and June 2013, 35 of them have posted not one.

In that duration, 74 senators, an impressive figure relative to past years, sponsored and followed through with a minimum of at least one legislation apiece. A few presented more than a dozen Bills, with the Senate Majority Leader, Victor Ndoma-Egba(PDP, Cross River), sponsoring the highest number, 25.

Other Senators, each with a minimum of 10 Bills are Ben Ayade (PDP Cross Rivers state) - 18 Bills; Ita Enang, (PDP Akwa Ibom) - 13 Bills; Dominic Obende, (ACN Edo) - 12 Bills; Smart Adeyemi, (PDP Kogi) - 11 Bills; and Ifeanyi Okowa, (PDP Delta) - 11 Bills.
At the bottom of the ranking are two states - Zamfara and Borno - with none of their Senators presenting a single Bill in two years.

The figures, provided by the Senate's Business and Rules committee, which catalogues each member's legislative activities from Bills, motions to petitions, appear a fresh justification for Nigerians' perennial concern about how much their representatives at the National Assembly actually deliver to justify their huge annual earnings.

Each Senator, according to RMAFC, is entitled to N8.2 million annually or N683,000 monthly as salaries. This salaries are exclusive of allowances such as estacodes, cars and furniture.

But the comprehensive compensation runs far higher into several millions per quarter of a year, as the legislators also approve what they call 'running cost' to themselves. For 'running cost', each senator currently draws N45 million quarterly - about N180 million annually, in addition to the 'meagre' salary.

Lawmakers, weary of the public's outrage over their pay, are often quick to cite the few hundreds of thousands monthly as nothing exceptional or deserving of the aggressive attention they receive.

But despite the huge pay, quite little has been delivered on legislation since 2011, according to the Business and Rules committee.
In all, 342 Bills have been presented to the Senate within the period; many of them, however,  are non-member Bills sent either by the executive, for example, budget bills; or forwarded by the House of Representatives for concurrence.

Of that number, only 28 bills have been fully passed by the Senate. Again, out of that of number, 20 are executive-sponsored. So, effectively, senators have only delivered fully on eight bills after drawing over N41 billion in earnings since 2011.

The Business and Rules Committee chair, Ita Enang, said the apparently low output notwithstanding, the Senate recorded 'tremendous achievements' with landmark bills in its first half of two years.

The two relatively important Bills passed by the Senate and which could be considered landmark - Terrorism and Money Laundering amendment acts - are executive sponsored.

The lawmakers argue that besides Bills, the Senate has also delivered on other functions including motions and resolutions on pressing national issues, confirmation of appointments, as well as oversight duties on the other arms of government.

Those without Bills in two years, as analysed by The Nigerian Telegraph, based on figures from the Senate committee on Business and Rules are: