How Security Personnel Foiled Supply Of Weapons To Insurgents In Kebbi 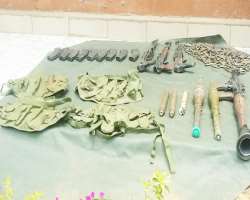 Listen to article
Insurgency in Northern part of Nigeria especially in Yobe, Borno, and Adamawa States has consumed many innocent lives,  mainly children and women. It has also resulted in the destruction of houses and property worth millions of naira. This has thrown the region into insecurity, chaos, political uncertainty and economic woes.

As a result, the Federal Government imposed state of emergency in the three states to curtail the activities of the insurgents in the region and the country at large. The North West have been enjoying a relatively peaceful atmosphere, especially Kebbi State which was described as the most peaceful state in Nigeria. But the recent criminal and insurgent activities in Sokoto State, a close neighbour to Kebbi State have indicated infiltration of insurgent activities in the state. This ugly and dangerous situation of insecurity in Sokoto has triggered apprehension, fear , and uncertainty of the security situation in Kebbi as the state may  witness infiltration of insurgency and the downturn of peace in the state.

The recent discovery of a fuel tanker laden with weapons and ammunition on July 11, by a combined team of the Army and that of the State Security Service at Malisa, Gwandu Local Government Area of Kebbi State enroute Sokoto from Kano State startled Kebbians and sent fears down the spines of people and that the state may no longer be safe from the activities of insurgents who have now found safe haven in Sokoto just 84 kilometres away from Kebbi.

The combined efforts  of soldiers of the 1 Battalion Army, Dukku Barracks, Birnin Kebbi which is under 1 Brigade of the Nigerian Army  with the Head Quarters in Sokoto and men of the State Security Service (SSS) intercepted a Tanker stashed with weapons and ammunition at Malisa, Gwandu Local Government Area of Kebbi state from Kano. The weapons and ammunition according to the army authorities were hidden in one of the inner chambers of the fuel tanker. The Commanding officer, 1 Battalion, Dukku Barracks, Birnin Kebbi, Lt. Col. Sunday  Jimmi Ayorinde Ilori  said that the intercepted weapons  included three AK4 Riffles and three Bombs while one Suspect, Ahmed Yusuf from Hadejiya in Jigawa State was arrested, but two of the culprits escaped. Investigations into the matter, he said, was still ongoing and called on people to continue to support and cooperate with relevant authorities to stamp out insurgent activities in the area.

'I am glad to inform you that on the 11th of this month, efforts of the 1 Brigade of Nigerian Army with Headquarters in Sokoto have started yielding results against insurgents' activities, the Battalion in conjunction with the SSS carried out an operation in which one suspect Mal. Ahmed Yusuf and a tanker with arms and ammunition was arrested', the Commanding Officer said.

The suspect, Ahmed Yusuf who ran out of luck and was arrested claimed to be from Hadejiya in Jigawa State but according to him was forced by those who hired him to carry the weapons and ammunition to Sokoto  at a price of N500,000,00(Five hundred Thousands Naira) which he turned down. He said after several persuasions to make him accept the offer and he refused, they threatened to kill him and all members of his family. On sensing the danger he was facing, Ahmed said he had no option than to agree and as fate would have it, he was caught.

The  arrested suspect Fuel Tanker Driver, Ahmed Yusuf, narrated what transpired between him and those who hired him, 'They forced me to carry the weapons or else they will kill me and my parents, they also offered to pay me five hundred thousand but I refused to collect the money. I did not report them to the police because they would not even allow me out of their sight, so there is no way I could have reported the matter. I am from Hadejiya  and  the fuel tanker belongs to Alh. Dahiru but he is not aware of all this. The method they used to hide the weapons was to put them inside one of the chambers of the tanker because it was empty', the suspect said.

Investigations by LEADERSHIP Sunday revealed that the interception of the weapons and ammunition in kebbi has caused panic in the state, especially in Birnin Kebbi, the state capital. Ever since the tanker was arrested by the officers, security watch has been tightened up in the state and rumours filling the air in the town even before the army authorities invited the press for briefing about the intercepted weapons. A resident of Adamu Aliero Estate in Birnin Kebbi, Usman Bala expressed his shock over the incident and said that people in the state are now living in fear because of the insurgent activities in the neighbouring state, Sokoto and the recent capture of a tanker with weapons by soldiers.

'I must confess to you that we are living in fear, we no longer feel save because of the crises in Sokoto and of recent, a tanker was captured with weapons and ammunitions in a border village in Kebbi; the weapons, we learnt, is meant to be transported to Sokoto for the insurgents,' Usman said.

Additionally, LEADERSHIP Sunday's findings also revealed that the peaceful atmosphere Kebbi is presently enjoying may not be unconnected to the persistent prayers for peace spearheaded by both the religious and traditional leaders in Mosques and Churches in the state  and the effort of the state government to encourage community policing and involvement of traditional leaders and religious leaders from the village to the state levels in security.