ALIKO DANGOTE: THE CONSCIENCE OF A $20 BILLION CAPITALIST AND PATRIOT 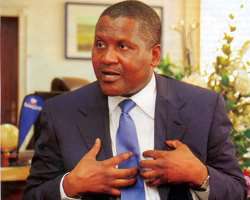 “Investors have become increasingly attracted to Africa as it has begun to demonstrate strong economic growth, an emerging middle class, greater political stability and improved government balance sheets…The total value of deals in Africa by foreign investors has tripled to $183 billion in the past decade, with deal volumes up 109 percent at 2,417,” as reported by Reuters recently.

Nigerian Stock Exchange (NSE) is without exception; its returns have been phenomenal particularly since the strategic intervention of Aliko Dangote.

It has been over a year since the election of Dangote, the billionaire industrialist as the President of the Nigerian Stock Exchange (NSE). Council of 15 members of NSE unanimously elected Dangote last year in Lagos. Since his inception, the bullish Nigerian stocks are attracting both local and foreign holders especially traders from advanced economies.

When investors and money managers were inquiring about Nigerian Stock Exchange, AFRIPOL did not hesitate to speak bountifully and proudly of NSE especially on the seasoned and strategic leadership of visionary Aliko Dangote.

Most of his investments are in Africa and with that he has shown that Nigeria and other African countries can be lucrative for investments due to large returns from them,” as was noted by Emeka Chiakwelu, Principal Policy Strategist at AFRIPOL.

The great leap of NSE capitalization has been attributed to splendid and great leadership rendered by Aliko Dangote . Every investor has gained from the bullish NSE including Dangote that has seen his fortune raised to $20 billion, when his majority stocks of 93 percent in Dangote Cement appreciated by three-fourths in the first quarter of 2013.

Such an astounding wealth, a $20 billion fortune has never been reordered by any entrepreneur in African business and entrepreneurial landscape. In the global ranking of wealthiest people, Dangote is now among the top 25 richest individuals world over.

The bullish “Aliko’s Dangote’s 93% stake in the cement company is now worth $19.5 billion. Add this to his controlling stakes in other publicly-listed companies like Dangote Sugar and National Salt Company of Nigeria and his significant shareholdings in other blue-chips like Zenith Bank, UBA Group and Dangote Flour; his extensive real estate portfolio, jets, yachts and current cash position, which includes more than $300 million in recently awarded Dangote Cement dividends, Dangote is now worth more than $20 billion” as Forbes magazines noted.

Dangote is among the most patriotic Nigerian and African business tycoons. He is always talking and reasoning on how his investments and wealth can benefit Nigeria and Africa. He is a capitalist with a patriotic conscience and he is showing and proving that further wealth creation is viable with a patriotic underpinnings.

Dangote invests heavily in Nigeria and Africa, such a corporate responsibility he assigned to himself, has revealed that he stand with Africans in the struggle to improve living standard and ameliorate poverty that is engulfing the continent.

Capitalists, investors and business executive move their capital and liquidity around the world in search of higher dividends, and it be must publicize that Africa is the place-to-go-to. Dangote consistently put his money in Africa and his investment is apparently growing and he has become an example of the possibility of wealth growth in Africa.

Dangote has literally become the face of pragmatic Africa with the investments he scattered around Africa. He has set the pace and has become an example for many other investors who are hesitant about sending their capital and investments to Africa.

Dangote just recently pledged to invest $15 billion in Africa by 2018. His investments are staggering and numerous including his company investment of $8 billion to set up oil refinery and $2 billion in fertilizer plant in Nigeria. All these investments are great job providers, thereby reducing unemployment and lawlessness in Africa and Nigeria in particular.

For the realization of the African century in 21st century, Africa needs indigenous and foreign investors who are willing to seize the numerous business opportunities offered in Africa. Dangote has shown the way and maybe others will follow his footsteps.

Commentary and Analysis by AFRIPOL