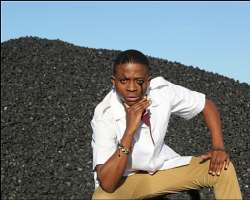 One of Botswana's musical rising stars, A.T.I, takes to the stage at this Sunday's live Big Brother: The Chase eviction show. The dynamic young rapper burst onto the scene in 2010 - and he's been taking massive strides ever since!

Inspired by seeing rappers like Vee and Excutedge performing on local television in Botswana, A.T.I started knocking on doors in an attempt to secure a recording deal. A driven and determined A.T.I managed fund his first mixtape himself - fame and fans followed, and he hasn't looked back since, having shared stages with Eve, JR, DJ Cleo, Scar, AKA and other continental industry heavyweights.

He characterizes his genre of music as a fusion of a host of musical styles including Motswako, Hip Hop and R 'n B. He listens to the likes of Aretha Franklin and Dolly Parton when he's relaxing at home, and is inspired by the work of Prince, Odirile 'Vee' Sento, Thato 'Scar' Matlhabaphiri and Kgotla 'Juju Boy' Ntsima.

Renowned for his dynamic stage performances, A.T.I is as captivating a visual performer as he is a singer. 'Not everyone understands the bits where I use my mother tongue,' he says, 'so my performance is basically listened to with the eyes'.

In addition to the sensational stars that have performed at the live eviction shows, Big Brother: The Chase has certainly delivered its share of smoking beats this season. So far, DJ's who have hit the decks at the Saturday night Channel O parties include Kiss FM's DJ Hipnotic (Kenya); Energy FM's Jossy Joss (Namibia); South Africa's DJ VanD from Kaya FM; Power FM's DJ Creejay (Zambia); DJ Cutrite from Botswana's Gabz FM; Cool FM's DJ Xclusive from Nigeria and DJ Klips from Power 101 FM in Malawi. This week, DJ PQ from Tanzania's Clouds FM will get the housemates rocking long into the night.

Don't miss the sensationally talented A.T.I on stage this Sunday on Big Brother: The Chase - and don't forget to vote to keep your favourite housemate in the game! The housemates in danger of eviction are Angelo, Annabel, Bassey, Dillish and Pokello. Voting is open right now and closes at 06:00 CAT on Sunday morning.