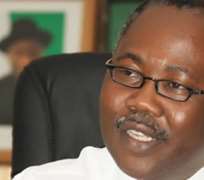 Hate him or like him, Mohammed Bello Adoke, the Attorney General of the Federation and Minister for Justice, and a Senior Advocate of Nigeria, is one public office holder who does not play with his official duties because according to those who know and indeed work in the Federal Ministry of Justice, this Kogi state -born versatile Lawyer does not allow any file to last over twenty four hours on his table before attending to the issues disclosed in those files. Those who have had dealings to meet with him in his Abuja office say that he is such a diligent officer of the law that ensures that all matters brought to his attention through official channels are treated with speed but with professional accuracy. As someone who has worked as a court reporter for one of the nation's liberal newspapers for nearly a decade before moving on, I have used my working knowledge of the ministry of justice and the justice sector in general to determine without any shadow of doubt that the current Attorney General of the Federation and minister cannot with any stretch of imagination available to man, be accused of laziness and lack of patriotic zeal just as those who know him say he is deeply religious.

As one occupying the nation's constitutionally recognized Federal Cabinet level public office, Mohammed Bello Adoke has indeed come under the spotlight from a number of quarters in the public especially the critical sectors of the public in more ways than all his predecessors have had to encounter during their stay in office with the possible exception of the then Federal Attorney General and minister of Justice who served during the dying days of the late President Alhaji Umaru Musa Yar'adua who had then insisted bizarrely that it does not matter wherever the sitting President operate from and that indeed the then sick President whose whereabouts were a bundle of mystery known only to the coteries of his kitchen cabinet members can indeed administer Nigeria from the sky.

But unlike that disgraced erstwhile Federal Attorney General [Michael Aandooaka] who entered the history book of Nigeria as the first and only former Nation's chief law officer who lost his professional title of honour of the Senior Advocate of Nigeria following his suspension by the Legal Practitioners disciplinary committee of the Nigerian Bar Association for alleged professional misconduct allegedly committed while presiding over as the Nation's chief law officer, Adoke on the other hand is a man that is properly organized and ready to withstand any formidable accusations with facts and figures and indeed those who know him very well say he is a man of good conscience. Adoke's only drawback is that unlike other politicians who are keen for media attention, he is extremely media shy to a fault and he is even being accused by some media practitioners as one Federal Attorney General who believes that his activities in office should speak for him and not engaging in media warfare with anyone.

This reminds me of one Chinese proverb that states as follows: "Sometimes, when good people get blamed for things dishonest people did they say, 'the black dog gets the food, the white dog gets the blame". But the Federal House of Representatives took more than legislative interest in this matter and had indeed accused the minister of lying and immediately I knew that he won’t keep quiet and allow his name to be dragged in the mud. He rose to the occasion and apparently rubbished the claims and innuendos raised by the federal legislators and insisted that his office did not act contrary to public interest in facilitating the settlement of the commercial dispute involving the Federal Government and Shell/Agip Companies and Malabu Oil and Gas Limited in respect of Oil Block OPL 245. To prove a strong point that he has nothing to hide, Attorney Mohammed Bello Adoke reportedly turned down all entreaties by some media consultants/strategists to do the fight for him but he instead opted to use the official ministry media team to authorize a press release in which he let out his strong defence in what is regarded as a formidable response to the outcome of the Federal House of Representatives even as he has made his mind known that he is ready to face independent investigative forum to prove his innocence.

In a statement signed by his Chief Press Secretary, Ambrose Momoh, and widely publicized in the media the AGF decalred that he was ready to be subjected to any transparent investigative process in order to unearth the truth.

Adoke said that at all times material to the transaction, he ensured that the settlement was conducted in the best interest of all parties in order to achieve a reasonable, fair and equitable outcome.

The minister said that the report and the controversy it had generated was a calculated attempt to bring his office and that of the other relevant agencies of Government to infamy because of the principled stance the government took to resolve the dispute in a reasonable, fair and equitable manner.

He said: "The outrage against the Office of the Attorney General of the Federation is understandable when viewed against his refusal to compromise his office in order to satisfy the demands of certain interests and individuals.

We know those who have compromised their positions in order to author the alleged ‘Report’ and their theatrical display for public gallery".

He added further; "We also know those secretly beating the drums for masquerades dancing in the market square. We shall confront them at the appropriate forum. How else can one explain why the ownership of shares in a private company would generate sufficient interest among members of the legislature so as to merit a resolution of a Committee that certain persons or companies are entitled to ownership of shares in a private company, when the Courts are the appropriate venue for the ventilation of such disputes between share holders (if any)"he added.

He also disputed claim that he said the report of the committee favoured him.

He said that after he appeared before the House of Reps' committee and stated his role that the committee was satisfied with his response.

The statement read thus; "when the Attorney General of the Federation appeared before the House of Representatives Committee, which investigated the transaction, he explained his role in facilitating the settlement and the Committee members were satisfied with his explanations. This was what the Attorney General of the Federation referred to when he stated that the Committee was satisfied with his explanations.

He said he did not make reference to any ‘Report’ of the Committee, as none, had been made available to him.

Adoke narrated the facts leading to the decision of the federal government under the leadership of both the late Umar Musa Yar'Adua and Dr Goodluck Jonathan to intervene and resolve the Malabu oil dispute.


He said: "In 2010, when this administration came to power, Malabu again, petitioned the Federal Government to implement the terms of the out-of-court settlement of 30th November 2006 on the basis of which they had discontinued their Appeal. Government also took cognisance of the pending cases instituted by SNUD against Federal Government of Nigeria (FGN) and/or Malabu, including Bilateral Investment Treaty (BIT) arbitration No. ARB/ 07/18 pending at the International Centre for the Settlement of Investment Disputes (ICSID Arbitration) to enforce SNUD’s rights to exclusively operate Block 245 as Contractor on the basis of the 2003 Production Sharing Contract(PSC) between NNPC and SNUD, and the financial implications of defending these actions on the public purse and opted for amicable resolution of the dispute".

"To resolve all the contending claims in a satisfactory and holistic manner, due regard was given to the Terms of Settlement of 30th November 2006 which had been reduced to Orders of the Court, the underlying policy of encouraging the participation indigenous oil and gas companies in the upstream sector of the oil industry and the fact that Shell had substantially de-risked Block 245. To accommodate all these interests, a Resolution Agreement dated 29th April, 2011 between the Federal Government of Nigeria and Malabu Oil & Gas Limited was executed wherein the FGN agreed to resolve all the issues with Malabu in respect of Block 245 amicably and Malabu also agreed that in consideration of receiving compensation from the FGN it would settle and waive any and all claims to any interest in OPL 245", the statement added.

"In furtherance of the Resolution Agreement, SNUD and ENI agreed to pay Malabu through the Federal Government acting as an obligor, the sum of US$ 1,092,040,000 Billion in full and final settlement of any and all claims, interests or rights relating to or in connection with Block 245 and Malabu agreed to settle and waive any

and all claims, interests or rights relating to or in connection with Block 245 and also consented to the re-allocation of Block 245 to Nigerian Agip Exploration Limited (NAE) and Shell Nigeria Exploration and Production Company Limited (SNEPCO), the statement stressed."

He said that the role played by the Federal Government, its agencies and officials in relation to Block 245 was essentially that of facilitator of the resolution of a long standing dispute between Malabu and SNUD over the ownership and right to operate Block 245.

According to him, "at all times material to the resolution of the dispute, the Federal Government was not aware of any subsisting third party interest in Malabu’s claim to OPL 245 and neither did any person or company apply to be joined in the negotiations as an interested party until the resolution of the

He said: "The Office of the Attorney General of the Federation had in the recent past reiterated the Government’s commitment to attract investment in the oil and gas sector of the economy and encourage genuine investors (local and foreign) by creating the enabling environment for their business to thrive."

Observers believe that Attorney Adoke has indeed presented irrefutable proof of the innocence of the office of the Federal Attorney General and minister of justice in the entire saga of MALABU OIL. We in the civil society community are prepared to give the Federal Attorney General the benefits of the doubt until any further evidence is disclosed that will overwhelm this monumental body of evidence that he has built around the role of his office and that of the President Goodluck Jonathan's administration.

The allegation of compromise against the legislators also deserves dispassionate investigation to ascertain the veracity or otherwise of it so that the culprits who would eventually be identified are prosecuted just like what obtained after the ill-fated probe by the defunct and discredited Federal House of Representatives ad-hoc committee on the petroleum subsidy fraud headed then by the Kano born legislator Mr. Farouk Lawan was found wanting in a case of alleged collection of $650,000 USD bribe from the Lagos businessman Mr. Femi Otedola.

It is in the self -enlightened interest of the Federal House that all cobwebs surrounding the probe of this MALABU alleged scam are exposed even if the members of the hallowed chambers are found to have been compromised.