NIGERIA, WHO IS CAPTAIN OF THIS SHIP?

Source: the wife of the President, Hajia Turai Yar'Adua. 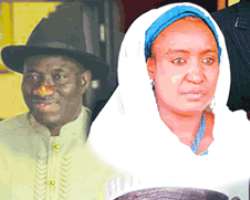 http://www.nigerianbestforum.com/blog/wp-content/uploads/2010/02/good-turai.gif Suddenly, the ship of state, which seems to have attained some level of stability following the February 9 National Assembly proclamation of Vice President Goodluck Jonathan as the Acting President, is back at the centre of turbulent waters.

As a result, the Nation's political temperature suddenly shot through the roofs moments after ailing President Umaru Yar'Adua, reportedly returned to Nigeria. The confusion over who is in charge of the ship of state immediately became apparent.

The national leadership of the Peoples Democratic Party (PDP) set the tone for the confusion. In a statement welcoming the president back to Nigeria after a 93-day sojourn in Saudi Arabia on medical grounds, it addressed Jonathan as acting President just as Yar'Adua in another statement, referred to the former Bayelsa governor as Vice President. But the National Assembly would take none of that insisting that it still recognizes Goodluck Jonathan as Acting President.

Although the ailing President through Special Adviser on Media and Publicity, Segun Adeniyi, said Jonathan would continue to be in charge until he is fit enough to assume office, information has it Jonathan would be taking directives from the wife of the President, Hajia Turai Yar'Adua.

Sources claimed that a meeting was held on Wednesday night between Jonathan and Turai, obviously to discuss grey areas of who heads the Nigeria government with full executive powers.

The weekly Wednesday Federal Executive Council meeting was the immediate victim of the confusion that surrounded Yar'Adua's shocking return, as he and the Acting President stayed away from the meeting, leaving Ministers, Special Advisers and other members of the Council stranded.

The cabinet members waited for over two hours before Jonathan directed the Secretary to the Government of the Federation, Alhaji Yayale Ahmed, to inform the Council that he had postponed the meeting.

Jonathan then directed the Ministers to report to his conference room for a 'mandatory' meeting at 2:00pm. Making the announcement at 12:10pm, Ahmed said, 'The Acting President has mandated me to announce that this meeting is postponed, but a special meeting with the Ministers will hold in the Acting President's Conference Room at 2:00pm. Attendance is mandatory; thank you.'

But the meeting turned into an anti-climax of sorts as it lasted barely five minutes.

Journalists who were excused from the venue at the commencement of the meeting had hardly returned to their waiting posts when the door of the conference room was opened to discharge the Ministers.

However, there was an indication of relief on the faces of the ministers.

No minister was ready to talk until the minister for Information and Communication, Dora Akunyili, one of the last to emerge from the room, disclosed the Acting President's short message to the Ministers.

Akunyili said, 'It wasn't a very elaborate meeting; the Acting President invited us, as you all know, to a meeting in his office meeting room at 2:00pm. 'When we came, he told us that he had heard that the President had returned to the country; that he had been briefed by the aides of Mr. President and he hoped to see the wife of the President this evening (Wednesday) and when we meet next week, we will be briefed on the outcome of the Saudi trip by the six ministers, members of the council, and that when he is eventually briefed by the President, he will call us again.'

Akunyili did not entertain any questions, and did not elaborate on the reasons the Acting President would be meeting Turai. Constitutional lawyer, Professor Itse Sagay (SAN) while reacting to the confusion said 'the making of the Vice-President as Acting President is based on the incapacity of the president. And, that incapacity, apart from his absence of almost 80 days as at that time, was also coupled with his own admission in the interview with the BBC that he was ill, he was not in a position to go home until his doctors give him clearance and that he has been away from duty. So, that was the basis.

'Now, the president being physically president in Nigeria, does not alter that basis because what is going to be considered is whether he is now physically and mentally fit to resume duties. And, it can be ascertained in many ways. One, either by having doctors examine him whether he can function and attend executive council meetings; and he does those things that include vigour, imply fitness physically and mentally, then, the conclusion will definitely be reached that he has recovered. In which case, he can now resume his position as president.

'In the absence of that, being brought back in an ambulance and then taken by an ambulance, somewhere without being seen, simply is an indication that his condition is still very bad, rather than the other way round. So, this cannot make any difference to the institution of an acting presidency'.

Economic Adviser to ex-President Olusegun Obasanjo, Prof. Osita Ogbu, also agrees. He urged the ailing President to address the citizenry for Nigerians to believe he is in charge and send a letter to the National assembly informing them that he is back.

According to him, 'we need to be sure that the President has arrived and he must transmit a letter to the National Assembly and it will be proper for him to address Nigerians after three months and until that is done, Acting President Goodluck Jonathan is still the Acting President.'

The PDP actually stroke the controversy. Its National Publicity Secretary, Prof Rufai Ahmed Alkali, in a statement welcoming Yar'Adua addressed Jonathan as acting president, but the recuperating President disagreed, through Segun Adeniyi, and referred to him as Vice President. He said, 'President Yar'Adua is grateful to the Vice President, Dr. Goodluck Jonathan, for competently overseeing the affairs of state in his absence.'

The Senate had in a resolution conferring the acting president on Jonathan on February 9 said: 'The Vice President will cease to discharge the functions of the office of the President when the President pursuant to Section 145 of the Constitution of the Federation, 1999 transmits to the President of the Senate and the Speaker of the House of Representatives in writing that he has returned from his medical vacation.'

But is not clear whether the Senate and the House of Representatives would accept Yar'Adua's statement as a notice to it that he has returned since it earlier adopted his interview with the BBC as proof that he was on medical vacation. Some Senators insisted that the President would have to communicate the House before he can be taken seriously.

In separate reactions to news of the return of the President, Mohammed Bello,a member of the All Nigeria Peoples Party (ANPP) from Kano State said: 'Our resolution is very clear and until he transmits a letter, we shall continue to insist and respect our resolutions. He has to transmit a letter to the National Assembly that he is back and ready to assume duties.'

To Thomson Sekibo, a member of the Peoples Democratic Party (PDP) from Rivers State, 'If you look at the provision of Section 145, it talks about two situations. One, when he is going on leave and second, when he is incapacitated to continue to carry out the functions of the office. Whenever these situations arise, the President is expected to transmit to the National Assembly in writing but the framers of the Constitution made it discretional for the President, so we did not have any communication.

'In our resolution, what we said was that through the BBC, we were properly communicated that Mr. President is receiving medical attention in Saudi Arabia. That goes to show that Mr. President is unable to perform the functions of the office and since the country cannot stay without a President, the Vice President was directed and empowered to become Acting President'.

However, while the power play is on, the ship of state continues to be tottering with some groups threatening to dismember the country over the un-Godly arrangement. The Joint Revolutionary Council (JRC), said though Yar'Adua has the right to return to the country any time he wishes, the JRC demanded to know who ordered for the deployment of troops during the time of arrival of the President.

Its spokesman, Cynthia Whyte, urged Jonathan to find out 'those who took such decisions without his knowledge and then act accordingly.' The group said the development is a wake-up call to the people of Niger Delta, including their soldiers and retired members of the Armed Forces, adding that the whole drama is a clear signal 'that we do not belong together.'