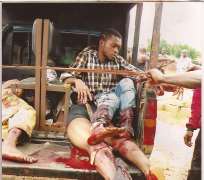 Anambra State has already started enjoying the dividends of the security vehicles given to all the 177 communities and some organizations in the State with the arrest on Tuesday, of four armed robbers at Agulu, the hometown of Governor Peter Obi.

Luck ran out of the robbers, with ages ranging between 18 and 21 years, when on a tip off, the vigilante people of Agulu community ran after them, after they allegedly killed somebody at the neighbouring Awgbu.

During ensuing gun battle, three out of the four robbers were demobilized, while one ran into the bush and escaped. Luck however ran out of him when the vigilante group, through intensive and well coordinated search arrested him at another village in Agulu, Nwanchi.

The leader of the group, known as Favour (alias King) was said to be from Umunze. Two of the armed robbers, who refused to disclose their names were said to hail from Ebonyi State and Ogabru area of Anambra State. The fourth one, Sunday Gege (alias Obodo) is from Ifiteani village in Agulu.

The robbers confessed to killing one woman from Awkuukwu at Agulu, who was returning from a trip to Achi, Enugu State. They also confessed to shooting and killing another person from Awgbu on Monday, the fallout of which led to their capture.

Speaking to the press, the Chairman of Agulu Vigilante group said that Anambra people should be grateful to Peter Obi for the new security equipped vehicles, saying that if not for the vehicle, the old one they were using before would not have matched the speed of the robbers. He also said that the payment of 10 vigilante people in each town out of the 177 communities in Anambra had boosted the morale of the vigilance people.

Meanwhile, the armed robbers have been handed over to Special Anti-robbery Squad at Awkuzu.

The Police PPRO, DSP, Emeka Chukwuemeka confirmed the arrest of the robbers. The Armed Robbers Captured At Agulu Town, Anambra State By The Vigilante Group