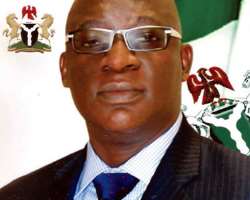 TRIBUTE TO THE LATE SENATOR AKPOR PIUS EWHERIDO BY THE PRESIDENT OF THE SENATE, HIS EXCELLENCY, SENATOR (DR.) DAVID A. B. MARK, GCON, fnim

Protocol:
Today, it is with a heavy heart that I join you to mourn our colleague and brother, Distinguished Senator Pius Akpor Ewherido.

The sudden demise of Senator Ewherido is traumatic. Each time death occurs, it tinkers with the oneness, corporate spirit, togetherness and love that bond us in this Senate. Death is inevitable but whenever it occurs, we are taken by surprise.

Given the level of impact that Senator Ewherido made not just in his family, hometown, constituency, state and the country at large, it is safe to say that he is not dead because his legacy lives on. Although he was a man with exceptional achievements, he never boasted about his achievement and contributions to his community and the society at large. He was a silent achiever who was referred to by his people as the Uloho (Iroko). He provided shelter to many in his community, a gesture that cannot easily be forgotten. To most people from his state, he represented a unique voice of courage and boldness. Senator Ewherido was a lively, calculative and focused person. I can describe him as a man of all seasons who was always confident, vocal and comfortable in any company he found himself. His death was untimely and painful. He left his footprints on the sand of history. He lived a memorable life of a true Catholic and Christian full of enviable legacies.

We cannot forget his persuasive, pedantic, brilliant and vibrant contributions to debates in this chamber. Each time he made contributions, he demonstrated patriotism and nationalism. He was a good team player who placed the love for the people above any form of individualistic or parochial interests. He was objective, truthful, sincere, committed and charismatic. The Senate has indeed lost a rare gem, as shown clearly in your testaments.

He was a grassroot politician who enjoyed the massive support of his people. Thus, appreciative of him, his people elected him to the Senate on the platform of the Democratic Peoples Party (DPP) in a state dominated by the Peoples Democratic Party (PDP). Although, he was the only DPP Senator, he was neither a lone ranger nor a lone voice because the Senate is a family.

He was the Vice-Chairman of the Committee on Marine Transport. He also served as a member of Senate Services, Education, Agriculture and National Planning Committees. He was a great man who used his intellect and legal skills effectively. He sponsored the bill on Corporate Manslaughter. It was easy to see the influence of the profession in that bill and on the performance of his duties as a legislator; he argued with facts, figures and statistics that easily convinced his colleagues. It was always a delight to listen to him because the people’s welfare and issues were his uppermost concerns.

The unfortunate death of our colleague, brother and friend is tragic. But as we mourn him, we must take solace in the fact that he lived a profound life, worthy of emulation. He was a true democrat, an outstanding leader and a distinguished legislator, who made tremendous impact during his two years of service in this chamber.

We have to learn from the impacts he made over a short period of time and realise that life is not about the number of years lived but the number of lives touched. And Senator Ewherido touched many!

You will be dearly missed my brother. This is not the end of the journey but the beginning. We live to part, but we will meet when we shall part no more. God in his infinite wisdom has a reason for everything and we must believe in Him.

Distinguished Senators, if death had given him a chance to bid us farewell, I believe he would have done so gallantly. Senator Ewherido had prepared himself for this journey. In the words of a Religious, Slor McCarthy;

I have got my leave. Bid me farewell, my friends and colleagues. I bow to you all and take my departure. Here I give back the keys of my door, and I give up all claims to my house. I only ask for last kind words from you. We were colleagues for long, but I have received more than I could give. Now the day has dawned and the lamp that lit my dark corner is out. A summon has come and I am ready for my journey.

Death is the great reality principle, which smashes the idols of self-sufficiency and omnipotence. Death is the testimony of our creaturehood. It is a true test of our faith in God.

Let me conclude with the words of St. Paul who offers guidance for the difficult hours of our lives. We need not be imprisoned in the fear of death. While there is still light and life let us “be steadfast, immovable, always abounding in the work of the Lord, knowing that in the Lord your labour is not in vain.” (1 Cor. 15: 58).

Senator Ewherido, fought the good fight. As we await the blessed hope of the coming of our Lord Jesus Christ, may the peace of the Lord be with him.

Our prayers and thoughts are with his family. May Almighty God grant all of us the fortitude to bear this irreparable loss.

May his soul rest in peace.
SENATOR (DR.) DAVID A. B. MARK, GCON, fnim
PRESIDENT OF THE SENATE, AND CHAIRMAN
NATIONAL ASSEMBLY