It’s film trick, Yar’Adua is not back, Nigerians say 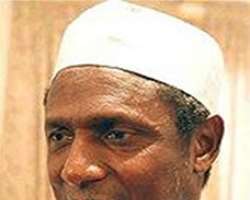 The announced return of President Umar Yar'Adua on Wednesday after 93 days of absence has thrown up so much dust. Because the people just heard and saw planes, ambulances and soldiers at the airport in Abuja and not the president, there is serious doubt that the number one citizen is back.

They believe that it is like a game of deceit played by Yar'Adua's power constituency and find it really difficult to accept until there is a compelling and convincing evidence to that effect.

Ben Sweet, lawyer
The method by which the information of his arrival was passed on to us is so suspicious and so degrading that no sane person would want to believe that under normal circumstances the President is back to country.

The issue of the president coming back after 93 days should call for celebration and in the glare light of television. The whole thing was shrouded in mystery and so clandestine that you would wonder what they are hiding for goodness sake. Seeing is believing. I would prefer to be a doubting Thomas. Bring this man out let me put my finger in his then I will know he has returned.

The acting president is in charge. Two captains cannot operate one vessel. The National Assembly purportedly acting in consonance with section 145 of the 1999 Constitution, went ahead and proclaimed the former Vice President, the Acting President, if that is the case, they should look at the other side of section 145, and it says “until or unless the president transmit a letter to the contrary that he is proceeding on vacation and therefore the vice president should become the acting president.

Bosun Oladimeji, politician
The manner few individuals are taking the country for a ride will bring anarchy and possibly coup that will lead to disintegration, which is the last thing we want. Yar'Adua and his aides are inviting coup with what they are doing. How can they hold a country of about 150 million people to ransom. Nigeria is not a banana republic where anything goes. Why should the issue of the president's health be shrouded in secrecy.

I don't believe Yar'Adua is in the country.
Eke Uche, lawyer
With the way and manner Mr. President arrived the country unannounced, there is room for suspicion. These are the reasons Nigeria has become a laughing stock in the comity of Nations. We all heard when President Clinton underwent heart surgery, his health situation was communicated to his people on daily bases, even when he was in the hospital. But why is Nigeria's case different? This shows that Nigeria is degenerating. It is widely believed that the President's wife with few cabal members is the architect of all these things, which is very unfortunate. The woman wants to hijack the whole apparatus in Aso Rock, but I think with the level of political consciousness and agitations it won't work. This makes mockery of the whole system – the presidency and the nation as a whole. I believe that no right thinking Nigerian would support what is happening in Nigeria today. On the issue of Acting President, so far as the National Assembly either rightly or by doctrine of necessity installed Mr. Goodluck Jonathan, and he remains the Acting president because Yar'Adua has not addressed Nigerians.

Lateef Raji, Lagos State AD chairman
I want to believe Yar'Adua is back but not as the country would expect of a president. This has made me believe the initial story that the president is clinically dead. Why shouldn't they allow people to see him, why was he secretly brought back? I have a strong belief that the president is in bad shape and can't be fit to discharge the functions of president due to his health.

And I think that above all, it is insulting that at this stage of our development, few people within the corridors of power could be toying with the rest of the country to the extent that no one knows anything about our President. They continue to churn out lies everyday about the president speaking. It is high time Nigerians take their destines in their hands. I think that the National Assembly has refused to do what is right by demanding that Yar'Adua should appear in a live television to address the nation. Anything short of that is unacceptable. I believe the acting President Goodluck Jonathan is in charge. It is unfortunate that the Federal Executive Council has refused to uphold Section 144 of the 1999 Constitution.

Pauly Onyeka, lawyer
There is the belief that the man is back. But I'll still want section 144 to be invoked to ascertain that the man is fit to continue in office. The First Lady should not be Yar'Adua's mouthpiece as there is no executive power with her. I believe something is wrong somewhere. From all indications, it is evident that the man has not come back. All they are telling us is a plot to make Yar'Adua still remain in office. Yar'Adua is not fit to work. If he were fit to work, he would have resumed. Turai is still acting on a belief that it is presidency that chooses her status not knowing that the virtue of First Lady is closely associated with the presidency.

You must be a wife of acting president before you enjoy the status of the First Lady. As far as I'm concerned, Turai is not the First Lady. Even if it has to be in acting capacity, the first lady is Jonathan's wife. The act of the National Assembly, which conferred the status of acting president on Jonathan was against the spirit of section 145 of the constitution and thus unconstitutional. Any act of Jonathan premised on the said conferment shall be null and void from conception. Those who believe that Mr. president ought to transmit to the National Assembly before resuming office were totally ignorant of the intendment of that section which sees such transmission as a counter to the one he was expected to transmit before travelling though he is not under complusion constitutionally to do so. Now that he did not transmit before travelling what are they expecting?

Charles Akitoye, politician
I'm personally sure he is back in the country. The situation I envisage is that Nigerians should pray and all the people at the helm of affairs should make sure that the country makes progress.

My opinion on is return is that if he could go out of the country and he is coming in, he should address the country. I don't believe he has come back. We are only seeing the plane in which they said he came back in and not him. He has to show his face as the number one citizen in the country. With the vacuum and chaos he had caused, he needs to address the nation. I don't think he is fit and by Section 144 of the Constitution, he should just in an honourable way resign his appointment and let Jonathan take over. The issue between Jonathan and Yar'Adua is simple. When a governor or president is incapacitated, the deputy is to take over. I know we have constitutional crisis in the country but common sense should prevail. Jonathan really wants to work for the country but Yar'Adua's sycophants make things difficult for us.

Emeka Ihejiaka, banker
Did you see any stretcher or any corpse or any human being walk out of that plane? They should stop fooling Nigerians. Presidency is quite different from the president. It is unconstitutional for Turai to be in power. We did not vote for Turai but we voted for both Yar'Adua and Goodluck. So, I have seen no evidence that Yar'Adua is back.

Folorunsho Ajao, cleric
We have been expecting him and we don't want him to die. And now he has come back he should allow his deputy to continue. This is not a family affair where a husband dies or when not okay, the wife takes over. But this is a national matter. Jonathan has to continue.

Sammy Ogbemudia Ekatah, Lawyer
From what I read and saw, I believe that Yar' Adua is in the country. But to me, his presence does not make any difference. He is not fit to play the role of the president, therefore, I am of the opinion that the Acting President, Goodluck Jonathan should continue in office.

National Assembly should as a matter of importance, summon the courage to remove Yar'Adua, because he is no more capable to perform as president. They should start to gather signatories to impeach Yar'Adua as president, so that the Acting President would become the President. We do not need distraction anymore, our country must move forward.

Anayochukwu Emeanua, politician
I do not believe that Yar'Adua is back yet. If he is back, let him talk to us. We want to hear from him. By virtue of resolution of National Assembly of February 9 that conferred on Jonathan the Acting President status, he is in charge. Also the 1999 Constitution does not make any provision for a First Lady to act. Therefore, any decision taken contrary to this is unconstitutional.