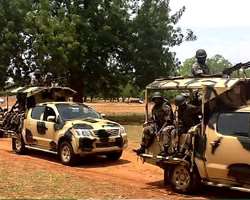 Spokesman of the Kano JTF, Colonel Ikedichi Iweha in an emailed statement said the operation followed intelligence gathered by the military.

“On Tuesday 16 July 2013 at about 0005 hours, following extensive intelligence build up, a combined team of the JTF involving the NA of the 3 Brigade in Kano and the Kano State DSS conducted a pre dawn raid at a house occupied by members of the terrorist group in Abunabu village of Guri Local Government Council, Jigawa State.

In the resulting shootout, three terrorists lost their lives while four (4) AK47 rifles, five (5) magazines and 164 rds of 7.62mm special (ammunition for AK47 rifles) were recovered after a thorough of the house,” he said.

Recovered Arms And Live Ammunition During The Raid

Iweha added that the JTF had earlier warned following the declaration of a state of emergency in some parts of the North East region of the country, that some fleeing members of the terrorist group would seek refuge in other peaceful states in the area with insignificant military presence, following ongoing military action against them.

The spokesman further assured that “the JTF will not rest on its oars in ensuring the safety of the good people of Jigawa State and the States within the area of operational responsibility of the Brigade. To forestall any attempts by terrorists to hibernate in local government councils, the JTF has increased the number of its personnel in towns in addition to increasing the number of patrols especially in identified flash points.