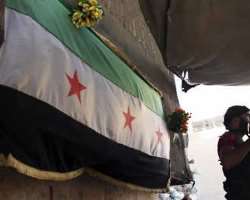 Syrian rebels poured reinforcements into a key Damascus suburb on Tuesday in an attempt to push back government troops who have renewed their campaign to secure the capital and build on battlefield gains elsewhere in the country.

Fighting centered on Qaboun, a rebel-held district where Syrian troops backed by tanks and artillery had made inroads on Monday as part of efforts to consolidate control over Damascus, President Bashar al-Assad's power base.

After two years of rebel gains in a war that has cost more than 90,000 lives, the tide has turned somewhat for Assad's forces, allowing them to seize the city of Qusair last month and press on with a campaign to link Damascus to Assad's coastal strongholds.

In facing down the mainly Sunni rebels seeking to oust him, the Syrian leader has received important backing from Shi'ite Iran and from Iranian-backed Hezbollah fighters from Lebanon as the war takes on an increasingly sectarian aspect.

At the same time, the rebels are plagued by infighting between Islamist fighters and members of the more liberal Free Syrian Army, which is backed by the West and some Arab nations.

Assad's forces are pressing their campaign at a time when the Free Syrian Army has yet to receive weapons promised by Washington but delayed by objections by U.S. lawmakers.

A U.S. official said on Monday that the Obama administration had made progress in overcoming these concerns but some details remained unresolved.

Both Republican and Democratic lawmakers fear the weapons could end up in the hands of Islamist militants, and would not be enough to tip the balance against the better-equipped Syrian government anyway.

CHEMICAL WEAPONS
Britain, meanwhile, said it would give Syrian rebels equipment to protect themselves against chemical and biological weapons as "a matter of special urgency".

Britain has said forces loyal to Assad have made limited use of chemical weapons, something the Syrian government denies.

In an attempt at unity, the Syrian opposition now intends to create a 10-member executive council that can to draw together disparate factions into a more structured army with better financing and weapons, Michel Kilo, a senior opposition figure, told Reuters in Paris.

In Damascus, the latest fighting comes almost a year after one of the rebels' most spectacular attacks in the capital - a bomb attack last July 18 which killed several of Assad's most senior security officials.

Abu Nidal, a rebel spokesman in Damascus, said on Tuesday that his fighters were trying to prevent the army advancing further into Qaboun, which it entered on Monday.

"Rebel reinforcements are entering the area," he told Reuters by Skype. "We expect the army to advance further into the area but they will be stopped."

The intensity of the fighting could be seen in footage posted on the internet by opposition activists.

The amateur video showed a large grey plume of smoke rising from a densely built residential area of Damascus. Mount Qasioun, which overlooks the capital, can be seen in the background.

Text accompanying the footage posted on Tuesday said the smoke came from a ground-to-ground missile fired into Qaboun.

ARMY CHECKPOINT
Elsewhere in the city, nine people including a child were killed at an army checkpoint, the Syrian Observatory for Human Rights said in a statement. Quoting activists in the area, the British-based group said they were all shot in the head.

It added that mortar bombs were being fired by the army into the southern district of Yarmouk, a Palestinian refugee camp on the edge of central Damascus that has fallen in and out of government and rebel control during the past year.

Clashes and bombardment were reported by activists in nearly every province on Tuesday, from central Homs city to the northwestern farming province of Idlib to the eastern desert city of Deir al-Zor.

In the south of Syria near the Israeli border, the Observatory reported fierce clashes between rebels and government forces in the village of al-Qahtaniya.

"Initial reports indicate that several fighters in the regime forces were killed, and some armored vehicles were destroyed," the Observatory said.

In western Homs province, gunmen loyal to Assad shot dead at least six mediators sent to try to reconcile warring sectarian groups in an area where people on opposing sides in Syria's war had until now been able to coexist, residents said.

The killings on Monday evening in the village of Hajar al-Abyad highlight the growing challenge of mediating between towns held by rebel groups and those controlled by pro-Assad militias known as "shabbiha".