A GLOBAL GARDEN FOR MANDELA IN NIGERIA 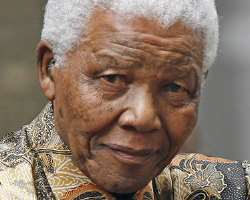 The whole wide world is stark awake, day and night, waiting for the Mandela hour. But there’s no escaping the fact that even in life or death Mandela trumps all. It is indeed with bated breath that the global village looks ahead to the great one’s 95th birthday on July 18. Of course that date has been universally fixed as Nelson Mandela International Day, or Mandela Day for short.

The epochal day was officially declared by the United Nations in November 2009, and the first UN Mandela Day held on July 18, 2010. The Mandela Day celebrating the icon’s 95th birthday on July 18 will be marked specially in Asaba, Delta State with the World Press Conference proclaiming the establishment of a garden of 95 trees to be known as “The Mandela Garden of 95 Trees.” The celebrated environmentalist and conqueror of the Sahara Desert, Dr. Newton Jibunoh, as the Chief Executive of Fight Against Desert Encroachment (FADE) will partner with Governor Emmanuel Uduaghan and the Delta State Government to make broadcast the well over 134,000 square metres of prime land within the Asaba International Airport complex, designed to build “The Nelson Mandela Garden of 95 Trees.”

The conceptual design of the Mandela Garden is in the shape of the map of Africa, featuring a life-sized bronze statue of Nelson Mandela, 95 trees symbolically planted as the Robben memorial, freedom mini-gardens, well-landscaped terraced fences made of hedge plants, concrete walkways, state-of-the-art restrooms, adequate parking, Nelson Mandela playground and park for children. The Mandela Garden is due for commissioning in August with members of the Nelson Mandela family, led by Ndaba Mandela, flagging-off the planting of the 95 trees.

Dr. Jibunoh in his drive toward greening the environment through FADE always had the abiding dream of planting the trees. It has been a life-long passion, culminating in the FADE Wall of Trees planted in Makoda Kano in the spirited bid to arrest desert encroachment. He then followed up on January 1, this year when he was accompanied by Governor Fashola of Lagos and other dignitaries to plant 75 trees in Lagos to celebrate his own 75th birthday. The 95 trees Jibunoh is partnering with the Delta State Government to plant in Asaba to mark Nelson Mandela’s 95th birthday is the climax of his lifework. He plans to retire to the Mandela Gardens to manage it by himself.

“I will run the park for the rest of my life as the keeper,” Jibunoh says in his Lagos Island Didi Museum office, adding, “My family will have to come and visit me there. They know my passion. It helps that the project is situated at the airport. They can always fly in and fly out. I believe Asaba provides a conducive atmosphere batter than Lagos, London or New York!” He then adds this info: “I’ll build myself a small hut where I will live to keep it.”

Governor Uduaghan will lay the foundation stone of the keeper’s lodge while the enquiry office will also be in the initial works.

The lack of maintenance that almost always bedevils most Nigerian projects would not be the lot of the Mandela Gardens, Jibunoh avers, stressing, “Not only will I manage it fulltime, I will put a succession plan in place devoid of governmental bureaucracy. They will run the place better after my time. Governor Uduaghan gave me 100 percent control over the place.”

Jibunoh revels in the drive of Ndaba Mandela “to mobilize over a billion people all over the world to key in to the Nelson Mandela inspiration.” The Nelson Mandela mystique is seen as an eternal legacy that is forever compelling even if Madiba dies.

“We have to use Mandela to inspire people,” Jibunoh says, pointing at the legend’s picture on the wall of his office. “We used to have Kwame Nkrumah. There is no other Mandela anywhere. He gave the world all he had. He went to prison for 27 years and came out with nothing. He ruled South Africa for only one term of presidency and came out with nothing. That’s the legacy!”

It is therefore incumbent on Dr Jibunoh to mobilize people of the world to think like Mandela. “What did this man not go through in the fight for freedom?” Jibunoh rhetorically asks, shifting on his chair.

Jibunoh feels quite fulfilled that he has a green-loving governor in Dr Uduaghan who supports wholeheartedly the placing of the Mandela Gardens in Asaba. “We are looking for a global institution, and the site of the gardens at the international airport in Asaba gives it the strategic global appeal,” Dr Jibunoh informs.

For Jibunoh, the term “Charity begins at home” was done in reverse order. He was heavily involved in improving other places, notably the Sahara Desert and places like Kano and Lagos before returning to his home locale of Delta State. He mentions the Igbo term and name “Nkeiruka”, stating that what is ahead is greater than the things done earlier. An irrepressible optimist, Jibunoh believes that security challenges such as kidnapping can be solved to make Nigeria a tourist haven, starting with the Mandela Gardens in Asaba.

“There are so many things to challenge the world in Nigeria,” he affirms, nodding. He argues that he had seen it all, from the days of colonialism through the Apartheid years and the Nigerina Civil War. He believes that Nigeria deserves celebration for leading the charge for the freedom of Nelson Mandela and South Africa.

Jibunoh points at the irony that people thought that Mandela was only fighting for black Africans, only for it to be discovered at the end that the whites benefited more! According to Jibunoh, “The whites who saw him as a terrorist are now the ones benefitting from Mandela the most!”

To mark the first global celebration of Mandela Day on July 18, 2009, to wit, Mandela's 91st birthday, a series of educational, art exhibits, fund-raising and volunteer events leading up to a concert at Radio City Music Hall on July 18, were organized by the 46664 Concerts and the Nelson Mandela Foundation. Then in November 2009, the United Nations General Assembly formally declared July 18 to be "Nelson Mandela International Day".

Born Nelson Rolihlahla Dalibunga Mandela in Mvezo, a village near Mthatha in the Transkei, on July 18, 1918, to Nonqaphi Nosekeni and Henry Mgadla Mandela, the man popularly celebrated all over the world as Madiba spent all of 27 years in jail for fighting Apartheid South Africa to a standstill. His head was never unbowed until he was released from prison and won election as the first President of a free South Africa. On the historic day of May 10, 1994 that Mandela was inaugurated as the democratic President of South Africa, the great man said, “We dedicate this day to all the heroes and heroines in this country and the rest of the world who sacrificed in many ways and surrendered their lives so that we could be free. Their dreams have become reality. Freedom is their reward. We are both humbled and elevated by the honour and privilege that you, the people of South Africa, have bestowed on us, as the first President of a united, democratic, non-racial and non-sexist government. We understand it still that there is no easy road to freedom. We know it well that none of us acting alone can achieve success. We must therefore act together as a united people, for national reconciliation, for nation building, for the birth of a new world. Let there be justice for all. Let there be peace for all. Let there be work, bread, water and salt for all. Let each know that for each the body, the mind and the soul have been freed to fulfil themselves. Never, never and never again shall it be that this beautiful land will again experience the oppression of one by another and suffer the indignity of being the skunk of the world. Let freedom reign.”

He gave the perfect example to sit-tight leaders in Africa and other parts of the world by serving only as a one-tenure President when he had enough goodwill to rule South Africa for life. He handed over voluntarily to his vice-president Thabo Mbeki in 1999, thus laying a solid succession plan for building the South African project. Mandela gave solid support to another stalwart of his party, the African National Congress (ANC), Mr. Jacob Zuma who succeeded Mbeki after winning the South African presidential election.

Mandela lost his father early in life, in 1927, and this made him to take stand to fight like his forebears for the liberation of his homeland. Mandela wrote in his acclaimed autobiography, Long Walk to Freedom, that his teacher gave him the name Nelson in his first day in school.

Mandela was sentenced to life imprisonment on June 12, 1964. He would spend some 27 years in prison. In March 1982, after 18 years, he was without any explanation whatsoever transferred to Pollsmoor Prison in Cape Town. In December 1988 he was moved to the Victor Verster Prison near Paarl. It was from this prison that he was eventually released on February 11, 1990.

Mandela refused to compromise with the offers of the apartheid regime while in prison, believing that only free men can enter into contracts. After his historic release, in 1991, the first national conference of the ANC held inside South Africa. Mandela was elected its President while his lifelong friend and comrade, Oliver Tambo, became the ANC’s National Chairperson.

Mandela was awarded the 1993 Nobel Peace Prize together with FW de Klerk. The end of apartheid happened on April 27, 1994, when Mandela “voted for the first time in his life – along with my people.”

Of course Mandela was inaugurated as the first President of a free South Africa on May 10, 1994. He set an example for other leaders by stepping down after one term in 1999. In retirement, he is still the toast of all across the globe. He has set up three foundations: The Nelson Mandela Foundation, The Nelson Mandela Children’s Fund and The Mandela-Rhodes Foundation. Until very recently his schedule has been relentless.

Mandela married Graça Machel, the widow of ex-Mozambican President Samora Machel, on his 80th birthday in 1998. Mandela can hold his head high for turning South Africa from an erstwhile pariah state to a destination of choice for all humankind. During his tenure the unheralded South African football team, just emerging from a worldwide ban, won the esteemed Africa Cup of Nations on home soil in 1996. The country also won the World Rugby Cup. It is a testament to Mandela’s reach that South Africa successfully staged the 2010 FIFA World Cup. The legend of Mandela can hardly ever be exhausted.