JONATHAN- AMAECHI FACEOFF AND THE MURKY ROAD TO 2015 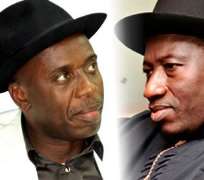 I thought I could avoid talking about the political rift between President Goodluck Jonathan and the Rivers State Governor, Rotimi Amaechi for a while. However as I continue to struggle to look to another direction, the whole thing continues to get murkier and more disgraceful. The sad incident last week at the Rivers State House of Assembly seems to be the crescendo. Some have called it a civilian coup. Some prefer to describe it as a travesty of our nascent democracy. Others call it desperate effort at democratic authoritarianism. Some others prefer to codify with the cliché of Jonathanian abaracadabra. Regardless of whichever side you are, the event of last week in Port Harcourt is an insult of a superlative nature on all true democrats the world over.

I know a little about the history and character of the Nigerian political class. There are a few words that could easily come to my mind whenever you invoke them. Never, and I mean never, did I imagine this level of insanity. And to envisage that we still have a President who hails from this region that is wallowing in an unfortunate orgy of denial convinces me that there is real danger ahead. So where will you start? When we saw it happen after the Nigerian Governors Forum (NGF), some us thought that these political miscreants would learn some lessons, understand the pulse of the Nigerian people and begin to thread softly. But it appears that they are adamant. The puerile political war between President Goodluck Jonathan and the Governor of Rivers State has now become such an open show of shame. At some point both of them were in denial. They hugged and smiled and some of us began to feel that they have made up. Some people had attempted to exonerate the President and indict the wife Dame Patience Jonathan. I do not agree that the President does not endorse the actions and utterances of his spouse. That is at best paediatric logic.

I am a defender of the democratic right of dissent as far as such rights are advanced with decorum. Let me make myself clear here. Dr. Goodluck Ebele Jonathan deserves respect as the current occupier of the office of the President and Commander-in-Chief of the Federal Republic of Nigeria. Therefore all governors, including Rt. Hon Rotimi Amaechi and indeed every Nigerian ought to respect both the office and person occupying it. Our peculiar history has made it a very powerful office especially after the civil war and successive military regimes. But I must quickly add here that the word ‘respect’ must be seen as what it is and the opposite word ‘disrespect’ should also be used appropriately.

I cannot fully describe the scope of the word ‘ disrespect’ but I know what it is not. I am prepared to argue that it does not in anyway include holding and, where possible, advancing divergent political views in a democratic space. Those who, therefore, peddle disrespect to Jonathan as one of the sins of Amaechi are mere propagandists and that is very wrong. Genuflecting before political office holders is a symptom that our democracy is still on a sickbed. We do not even understand the democracy we pretend to be practicing. We often mistake democracy to mean regular elections. No, not at all. Democracy is about freedom and choice, including not choosing at all.

Unfortunatley,our minds are still working as though we are in a military regime or a one party autocracy where any form of alternative view cannot be tolerated. Until we get to that stage that we can tolerate opposing views, then we cannot call ourselves democrats. One other aspect of the ‘disrespect’ of the President by the Rivers State Governor is perception that Mr. Amaechi has not voiced his support for Dr. Jonathan’s 2015 election even before it is announced. And the protagonists of this latter aspect condemn Amaechi even the more for failing to categorically voice his support especially since he is of the same stock, kith and kin with the president. Now I do not blame those who believe that if you are from the south, you must support a southern president. That is an unfortunate carry over from the immediate post colonial era when many of those who fought for independence retreated to their various tribal cocoons in search for tribal, as against national, legitimacy. And so if Mr. Amaechi or any public office holder does not consent to support the president, such a person will automatically be labelled a traitor that must be hounded and harassed to submission. So where is the place for performance in all of these?

Many commentators have urged Mr Amaechi to exercise some restraint. They argue that he belongs to the same party as the President, must be bound by the decisions of the party, be it composition of the party leadership or automatic candidature etc. However, one must say that the Rivers State governor has not said to anybody that he will not support President Jonathan’s probable re-election bid. What Mr. Amaechi has said publicly is that even though President Jonathan got more than two million votes from Rivers State, the federal presence in the state has been very minimal. He has told everybody who cared to listen that, on the contrary, many of the oil wells belonging to the state have been taken away and that the federal government failed or refused intervene timeously or at all. He has complained about the suspension of the funding of LNG project in Bonny to shift financing to Brass LNG. He has also said that the Federal government is yet to refund about 150 billion naira spent by the state on federal roads so far. So is it wrong that Amaechi complained? Who wouldn’t? The matter would have been an open and closed issue if the relevant federal agencies promptly addressed the veracity or otherwise of his assertions, just like Elder Godsay Orubebe did regarding the Rivers portion of the East-West Road project. Democracy, especially in a federation, is about allaying the genuine fears of respective interests and federating entities, not battering them.

It is the position of this article that even though both political gladiators will suffer (and have suffered) tremendous losses from this unending battle, President Goodluck Jonathan may unwittingly end up the bigger looser. If he is thinking about contesting election in 2015, he should quickly make peace with his brother and not allow this matter to escalate or snowball to tragic dimensions. There are conflict entrepreneurs and political mercenaries who are lining up to benefit and are indeed already benefitting from the current saga and he should not let them. Furthermore, the President should watch out for any action that will put his integrity in doubt before the Nigerian people. Since after the NGF elections, many Nigerians have begun to doubt the sincerity of President Jonathan.

The Nigerian President had denied repeatedly that he was uninterested in the outcome of the elections, only to later make a u-turn to support a faction. As much as possible a President must strive to be seen as someone who has integrity and who will stick to any promise he makes or statement he puts out in the public domain. Now the President has also said that he is not involved in the Rivers State crisis. Almost every Nigerian knows the true position and has said so in open defiance of the presidential stand. This speaks volumes. However, again, the wife of the President has made public statements that indicated her antagonistic position. So instead of denying, the President and the Governor should own up and pursue genuine reconciliation for the sake of the interests of Rivers people and the whole of the Niger Delta region.

On a related note, I watched some of the video footages from the free for all fight at the Rivers State House of Assembly and was very embarrassed for our democracy. I condemn the rascality, brutality brigandage and bestiality on display. According to the facts presented by those present at the incident, Hon. Evans Bibi started the fight by slapping the Speaker and assaulting Hon. Chidi Lloyd. Not done, he boasted before the camera chanting cultist slogans to demonstrate his exploits to his retinue of miscreants mobilized for what seemed to be a well-planned showdown. Now one wonders how these sorts of characters found their way in the first place into the parliament and what they really do there. Law making? Clearly not! It is wrong for anyone to convert the parliament to a battlefield. For aides of the governor, I am sure they acted to defend their principal. No one should blame them too much for that. What if they succeeded in shooting the governor as was allegedly ordered by one of lawmakers present.

If you found yourself in such a situation, what would you do? I am not a security official but even as a civilian if you threaten to kill my boss, I will fight to defend him if I am able. In any case, I was told that the system would have held them responsible for failing in their primary responsibility. Finally, I want to urge President Jonathan and his younger brother Amaechi to halt further covert or overt hostilities and reconcile with one another. Nigerians are tired of this rift that seems to be based on petty politics rather than ideology.