Celebrating the Class of 2013: US Consul-General hosts nominees of The Future Awards Africa 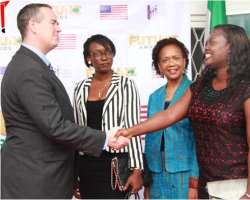 The nominees of The Future Awards Africa 2013 took the spotlight as The United States Consulate hosted the inspiring young Africans to a reception at the Ikoyi, Lagos residence of the Consul-General, Jeffrey Hawkins.

The invitation-only black-tie event anchored by Rubbin' Minds host Ebuka Obi-Uchendu and TV veteran Bene Uche was a gathering of innovators, change-makers and entrepreneurs nominated for Season 8 of The Future Awards Africa 2013.

“For the nominees present this evening,,” Mr. Hawkins said. “The fact that you have made this nomination list means that you have worked very hard in your community and the society at large. It also means that people are watching you and following your breakthroughs. You are considered an asset in Nigeria, to Africa, and the world at large.”

“We at The Future Project are inspired by you all everyday and are motivated to work harder because of your stories,” said Adebola Williams, a director with The Future Project. “It doesn't matter who wins the final prize, what matters most is that you have been able to impact lives and get recognized.”

The 2013 edition of The Future Awards Africa is held in partnership with the Youth Office of the African Union Commission. Nominees for the biggest prize, the African Young Person of the Year 2013 will also be announced on Thursday, after the 1st ordinary session of the meeting of the commission's Bureau of COMY IV in Brazzaville, Republic of the Congo. The Brazzaville meeting is a follow up of the 4th Conference of Ministers of the African Union, in charge of youth development.

The awards event holds in August 2013. There will be no public voting for this edition of The Future Awards Africa. U.S CG PRESENTING A CERTIFICATE TO A NOMINEE U.S CONSUL GENERAL AND A NOMINEE (2)