THE FIRST LADY AND HER EXCESSES 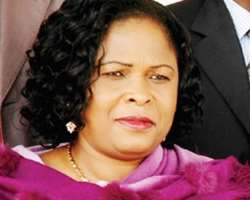 Who says women are not powerful? Women are not just powerful; they indirectly or directly determine how the affairs of most nations are run. Some of the most important decisions in history have either been influenced or even made by women. Like Groucho Marx the American classic comedian once said “Man does not control his own fate, the women in his life do that for him” Women wield a lot of power and influence not just in the kitchen or in the bedroom, they wield a lot of influence when it comes to a man's ears as well.

There is nothing that influences a man’s decision as much the voice of his wife or mistress as the case may be. There are several examples of powerful men in history whose actions were backed or motivated by women.

Examples of such women include Isabella I of Castile, Eleanor of Aquitaine, Nefertiti Queen of Egypt, Cleopatra and several others.

In modern times, the position that best depicts the influence, prestige and power of the woman is that of the wife of the president or head of state and Nigeria have had its fair share of wives of presidents and heads of state who have one way or the other influenced the decisions and actions of their husbands.

When it comes to wives of the president or head of state, we have seen different types; we have seen the flamboyant, the reclusive, the flashy, the matronly and even the coquettish. The evolution of the position of first lady in Nigeria has been in stages and eras. It has slowly evolved from the initial harmless and supportive position to the overbearing monstrosity we have presently.

First, there was the era of “oyibo” first ladies; when spouses of the different Governor-Generals acted as first ladies, the most notable of which was Lady Flora Shaw Lugard who named this geographical space Nigeria, after her husband decided to weld people of different cultures and languages together as one country.

Then came the era of indigenous first ladies, when we had the likes of Flora Azikiwe, Victoria Aguyi-Ironsi, Victoria Gowon, Ajoke Mohammed, Esther Oluremi Obasanjo and Safinatu Buhari acting as first ladies. These ladies were noble, they operated from the background. They merged their roles as wives and first lady seamlessly. These women realized that they were ladies first before been first ladies and they comported themselves in like manner. They were seen but not heard. They knew their place especially in the African context. But their laid back posture didn’t detract anything from their elegance, as most of them carried themselves only in manner befitting of queens. Simply put, these women were role models.

Sadly, the era of these noble first ladies ended with the coming of General Ibrahim Badamosi Babangida. His spouse Mrs. Maryam redefined the concept of first ladyship; she took the position to another level altogether. She remodeled the position using the American template. She was beautiful, intelligent, charismatic, flashy, ambitious, and reveled in her position as the wife of the president. Unlike others she didn’t just want to be seen, she also wanted to be heard and she wanted a position/space of her own. She carved out for herself and sought to legitimize the position of first lady.

She started her own pet project, Better Life for Rural Women and with her panache she got everyone attracted to the project, never mind that most of the fund for her project was public fund. Politicians, business men and others all struggled to be identified in one way or the other with her project. She strutted across the land like an empress with her flashy smile and Nigerians were enamored by her. Maryam Babangida thus set a negative trend, as almost every other first lady that came after her followed with their own uppity character and pet projects. Save for Justice Fati Abubakar, every other first lady improved upon the illegitimacy created by Maryam Babangida. This trend continued such that over time, the illegitimate and unconstitutional position of the first lady became fully accepted and even somewhat endorsed by Nigerians. First ladies of this era became so influential and powerful so much so that we thought that we have seen the height of abuse of power and privileges by these women. But along came the present era, the era of Turai Yar Adua and Mrs patience Faka Jonathan.

However, the advent of Mrs. Patience Jonathan have made Alhaja Turai Yar adua look like a learner in the abuse of power by first ladies. Under Mrs. Jonathan, unconstitutionality has become constitutionality and illegality has become legality. Never before has Nigerians seen such flagrant abuse of power. This era has seen the creation of the office of the first lady with full paraphernalia of government thus making the position an official one. The first lady now moves across the land like an elected official complete with all the perks and appurtenances. Nowadays, people dread the visit of the first lady to their state because of the inconveniences associated with such visit. The visit of the first lady to some state like Lagos and lately Rivers state meant the total lockdown of these states.

Never mind the fact that the position of the first lady is not mentioned anywhere in the constitution, there is a now an official seal of the first lady of Nigeria. Knowing Nigerians and our high level of tolerance for the absurd, I am not worried that few people have opposed or raise any alarm about the excesses and impunity of the first lady. What worries and troubles me is where and when this impunity and excesses is going to end?

The imbroglio in Rivers state reminds one of the local parlance “the witch cried yesterday and the child died today, who does not know that it was the witch that cried yesterday that killed the child who died” Fact is whether, Mrs. Goodluck Jonathan admits it or not, her conduct so far leaves much to be desired. We are witnessing something of an aberration in Nigeria today, where an unelected first lady sees herself as more superior and powerful than an elected governor and keeps instigating people openly against a sitting governor.

I care less about the travails of the governor and his squabble with the first lady. This is their private affair. If they don’t like the each other’s face, so be it, but their quarrels must not be allowed to form a clog in the wheel of governance a state.

My take is if these first ladies desire power that much, they should simply wear the garb of politicians and stand for elections instead of this unconstitutionality we are witnessing right now. We cannot have two presidents in a country. The role of the first lady is at best an advisory role and should be seen purely in that context at least until the role is constitutionally changed. This impunity must stop! It has to stop!