Source: a certain conclave, foaming at mouth and whining, that the nation should continue to wallow at sea like a rudderless ship. 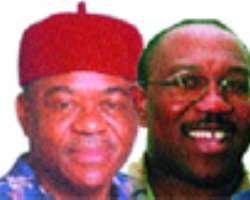 Did you follow the fawning, grovelling and foaming at mouth by the governors of the South Eastern States? Did you note that they sounded like men who had boarded the wrong train and were headed for the wrong destination? Did you also reflect, as many did, on why they appeared to cry more than the bereaved?

Well, I wondered and was quite embarrassed that while the whole of Nigeria accepted that Nigeria had dangerously drifted; that soldiers appeared to have written their dawn broadcast in seizure of power, and that citizens, at the length and breadth of the country, had demanded a semblance of a figure head, these fawning governors had emerged from a certain conclave, foaming at mouth and whining, that the nation should continue to wallow at sea like a rudderless ship.

As I wondered, I also pondered what could be the reason. I don't know whether you have an answer? I can only interpret what it seemed their lips were muttering as they ran in the direction, which negated national interests.

In the first place, most of the Igbo governors are men lacking in confidence, as they had come of one process of chaperoning or had their future presence in the coveted rooms anchored on the man, Yar'Adua and his immediate family.

The only exception can be Peter Obi, whose participation in the show of shame and exhibition of inferiority complex, was a surprise. Obi had arrived on his own steam. Yes, given that he had the powerful push of the like of Chukwuemeka Odumegwu-Ojukwu, who, in turn, is not given to genuflecting before any man, he was expected to behave well. But, then, he participated and therefore, joined the jaundiced group.

Prior to his ascending as governor, he had established the track record of a stand-up guy. He fought the national cabal in the court and held the mandate of the people. He has fought a re-election and won. Why would this man join the other governors who cannot even prove to command any reasonable loyalty and followership?

See, the others are no match. Is it Governor Martin Elechi, a typical product of familial packaging and the hefting of an incumbent, who applied the muscle of government to have a great grand father elected a governor of a modern state? What about Sullivan Chime of Enugu State? This governor is a typical description of a godson who came to power on the shoulders of an intransigent godfather, who, in turn, never listened to all entreaties. Even when it was pointed out to him that his godson's world wide reputation never exceeded the enclosure of a local council ward, he rode rough-shod over every view and made him the governor. The way Chime has so far sustained himself in office is known to be very close to the First Family.

Now talk of Ikedi Ohakim, a new joiner in the family of PDP and a product of done-deal to ensure that either Ifeanyi Ararume or Martin Agbaso never won the governorship election in Imo State. Now, take a look at Theodore Orji. This was a retired civil servant, political neophyte and product of another godfather. In fact, at the moment, he lives this confused life on what party platform to mount. For hunger for power and protection of the do-or-die family, he salivates for possible inclusion in the 'biggest party' in Africa.

But in fairness, these are not alone. In the past, it was always Ohanaeze, which did the disgraceful job of 'never to rock' the boat. But today, Ohanaeze, led by an exposed and suave diplomat, showed courage and openly gunned for installation of Goodluck Jonathan.

Sometimes, I wonder whether this conduct of the governors had been as a result of inferiority complex induced by the defeat in Nigeria-Biafra war. Why I do not accept that it has anything to do with defeat-mentality is that the man, Ikemba Ojukwu, who headed Biafra in the war years, does not bow or turn away from any threat. He remains a proud man, with the courage to state his views and who will go down fighting, if the need arises.

Indeed, in the case of the prospects of Jonathan, the Igbo governors should have been in the forefront of getting the project realized. Take it or leave it, Jonathan can be called an Igbo man. Indeed, in the past, his people were called Igbo men and women. That is if it comes to that. And now that he, as others of his kindred, bear this Ijaw/Niger Delta identity, it is only too good that the opportunity (though someone's misfortune), which presented itself, is good for a citizen of the most troubled region in Nigeria.

It then beats one's imagination why the Igbo governors would be so frightened as to prefer the drifting of the nation to the rise of a kindred man as the acting president. The South West governors never voiced any collective view, in preference for drifting and anarchy. The South South governors, who can be said to be keener brethren of Jonathan, never said a thing. The northern governors, who, by simple, naÃ¯ve political calculation, could be said to be shortchanged by the illness of Yar'Adua, never said anything like what the Igbo governors said. In fact, one or two of the northern governors had demanded an end to the uncertainty created by the absence of Mr. President.

So, rather than talk nonsense, why did the governors not keep their mouths shut?

You can see why I am dumbfounded.