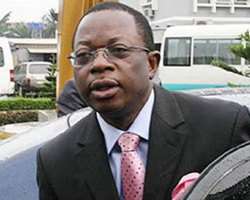 Counsel to Akingbola, Wole Olanipekun (SAN) informed the court that the defence had filed a motion dated July 4, 2013 supported by a 20-page affidavit disposed to by the first defendant before the court. He said the motion sought to raise two issues.

The second issue challenged the locus standi of the EFCC in instituting the case. In the application, Olanipekun said EFCC had no power within the confines of the law to try such an offence. He asked the court to strike out the entire information contained in the charges against the first defendant.

Taiwo Osipitan (SAN) appeared for the second defendant. Osipitan also presented an application via a motion dated July 9,2013. The application sought to also strike out the charges against Dada on the grounds that the proof of evidence did not disclose anything linking him to the offences for which he was charged.

EFCC counsel, Emmanuel Ukala (SAN) however opposed the submission. He informed that court that the case started in a sister court under Justice Habeeb Abiru and had reached a concluding stage before Abiru was elevated to the Court of Appeal. He said the prosecution had filed a counter affidavit in which it prayed the court to disregard the applications by the defence counsel because it will amount to a waste of time of the court. He said the matter was adjourned in February for trial to commence not for the defence counsel to come up with applications to quash charges. He said the same issues had been raised before Abiru and it was stuck out.

“The same issues have been raised before Justice Abiru and at the Court of Appeal. Akingbola vs FRN 2012 NWL; section 211 of the 1999 Constitution which pertains to powers of the Lagos State Attorney General were examined and further pronouncements were made. At page 530 of that report, section 211 of the Constitution recognises the fact that a criminal proceeding can be constituted not only by an Attorney General of a State but any other authority vested with such prosecutorial powers. Page 532 of the same report , particularly paragraph C – G, the same Court of Appeal came to a conclusion that EFCC has rightly initiated criminal proceedings under a State Law and that only the Attorney General of Lagos State has powers to challenge the powers of the EFCC not an appellant .”

Ukala went further that “ the impression being created is that the exercise of powers to prosecute in this case is that of delegation. This case has shown that this is not a matter of delegation. EFCC by the Act which created it vested powers in it to institute any criminal matter. A charge of stealing is part of economic crimes. EFCC is acting right and operating within its capacity and being an agency of the Federal Government, it can institute any matter on behalf of the Federal Government. I therefore urge your Lordship to strike out these applications because they lack merits.” he submitted.

After listening to arguments from counsel, Justice Onigbanjo adjourned ruling on Akingbola’s application to July 15,2013 and struck out the second defendant’s application for abuse of court process.


Akingbola and his co-defendant were previously arraigned before Justice Abiru of the Lagos State High Court in May, 2011 on a 27-count charge bordering on stealing N46billion depositors’ funds. The case was at the concluding stage when Abiru was suddenly elevated to the Court of Appeal. Abiru’s elevation led to the re-arraignment of the duo before Justice Onigbanjo in February, 2013.