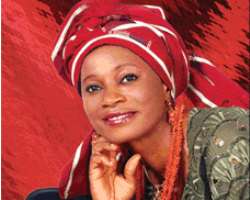 For Oluyinka Ayanda, a long time dream has finally come to fruition. Since childhood, the pretty mother of two has discovered her talent for music, playing active roles in the church choir as a soloist and back up singer. And today, in spite of her hectic schedule as a senior cabin crew member of Arik Airline, Yinka has found time to realize her artistic ambition.

In deed, she has finally unearthed her innate musical talent and given voice to her passion for traditional music. 'Teni n' Teni', a lyrically powerful concoction of songs that espouse African culture and tradition, is Yinka's debut album that is ready for launch on May 9, 2010. She opens up to Blockbuster on her musical effort, her challenges and the exciting world of air hostess. Enjoy:

Background
I am from Ikare Akoko, Ondo State. I attended Surulere Primary School and Akintan Grammar School all in Lagos. I have a degree in English from University of Ado Ekiti. I have worked in one or two places before joining Arik Airline as a cabin crew member. I started music as a teenager when I was a chorister in Cherubim and Seraphim Church (Ayo Ni) in Mushin, Lagos in 1985. I used to work with an uncle who performed at social functions. I also participated in some social programmes while in school.

It's all about culture
My new album is all about culture and tradition. I want our people to continue to uphold their culture and tradition. There is no place like home. I have traveled far and wide and discovered that there is no place like home. Home is home. I love to speak the Yoruba language a lot. I appreciate the language. Anywhere I go once I see that you are Yoruba I would never speak English to you. My culture reflects in the way I dress and behave. Once I know you are older than me, I give you your due respect.

Passion for music
I have passion for music. Music flows in my blood. I cannot do without music. I can give up anything for music. I grew up listening to the music of Victor Olaiya, King Sunny Ade, Ebenezer Obey and others. Now I love listening to the music of Yinka Davies, Shola Allyson and Asa. These artistes play sensible music not the rubbish that has taken over the scene today. They are my role models. I have been trying to do this all my life. My producer, Julius Olagoroye aka Julie King has been on my neck even before I went to the University. But I always ran away from him because I didn't want anything to distract my attention as a student. Then recently, he brought the idea once again and I decided to give it a trial.

The album
The title of my new album is 'Teni n' Teni'. It means what's mine is mine. As I said earlier, wherever you go, no matter where you find yourself, home is home. I appreciate my culture. I appreciate my country. I appreciate everything that has to do with Nigeria. 'Teni n' Teni' also means appreciating yourself and what you have. What you have is very important. You have to guard against what you have jealously. In the album, I have five songs which I wrote and composed all alone. They include 'Teni n' Teni', 'Omoge Sora', 'Mother', which is dedicated to all mothers in the world, 'Jenr'aye Gbe' and 'Kajola' (Destiny). 'Omoge Sora' could be described as my favourite because as a woman I know that one has to be serious, focused and determined to earn the respect of men. It's not easy for a woman to make it in this world so she has to be determined and prepared to go the extra mile.

Mothers of the world
I did a special song for mothers because like I always say I didn't appreciate my mother until I got married and started having children. I believe you have to respect and honour your mother. Mothers are wonderful people. They are always there for their children. I have gone through a lot as a mother even though my kids are still very young. For my mother to have stayed behind me up to this day, I need to appreciate her. I know what she has gone through in life. She has made me what I am today. I haven't gotten there yet but I thank God for her. That's why I sang a special song not only for my mother but also to all mothers in the world.

Challenges
Time management was my major challenge while putting the album together. Because of the nature of my job as an air hostess, I didn't have much time. Sometimes, when I close from work I head straight to the studio. Most times, I would sleep in the studio and the following day I head straight for work. Another challenge is finance. I took up the responsibility for the production all by myself. I have committed virtually all what I have on the album.

Work, music and motherhood
Going into music does not conflict with my job as a cabin crew member in Arik Airline. I can cope very well with the two. My husband used to say that you are not a good manager until you are able to manage both serious and unserious positions. With God on my side and with the support of my husband and bosses in Arik, I am able to cope with my job, music and being a mother.

Exciting world of air hostess
As members of cabin crew, we are like every human being. But we have been trained not to entertain any fear, including the fear of death. To us, turbulence in the air does not mean death. It doesn't mean the plane will crash. Traveling by air is like traveling in a car whereby you run into bumps on the road. What most people don't know is that traveling by air is the safest. We have some cabin crew members who have been flying for close to 20 years and nothing has happened to them. If these people have their way, they would want their children to take over. When I have a flight, all what my husband and children wish me is 'safe flight'. They don't entertain any fear because they know I would come back. So, I enjoy my job as an air hostess. It's quite exciting. And above all, Arik Air is a wonderful place to work.

Album launch
Sunday, May 9, which is Mothers' Day, has been chosen for the album launch. This is in honour of great mothers of the world and because of a track, 'Mother' that I dedicated to them. In view of their inestimable and exemplary motherly qualities, I have invited to the launch good mothers like the First Lady of Lagos State, Mrs Abimbola Fashola (mother of the day), Hon. Abike Dabiri-Erewa, Deputy Governor of Lagos State, Mrs Sarah Sosan, and eminent personalities like Ambassador Segun Olusola (father of the day), Dr. Doyin Okupe and Captain Chris Najomo, who has been penciled down as the chief launcher.