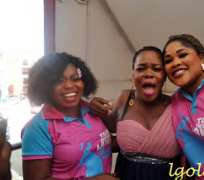 Friends of the pregnant actress, Taiwo Aromokun recently got a shocker of her life when her friends gathered to give her a befitting baby shower.

The beautiful but heavily pregnant Nollywood actress who is married to an Amsterdam based dude is set to welcome her first baby any moment from now.

Remember, a few weeks after Bisi Ibidapo-Obey got her own baby shower from friends; she delivered her first baby which she claimed to be for Dino Melaye. A few weeks back. Bisi too gathered some friends of the actress like, Moji Olaiya to be part of Taiwo's too.