YOU WILL GO TO HELL

Source: all quarters including the big names in the nation's political class. 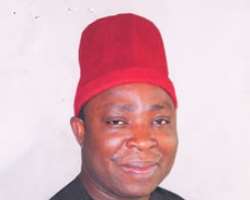 Nigerians are actually bitter with the development in the polity regarding the hazy situation that developed at the presidency this week when without prior notice President Umar Yar'Adua came back.

It has been a flurry of reactions from all quarters including the big names in the nation's political class.

One of such Saturday Sun spoke with is Chief Victor Umeh, National Chairman of All Progressives Grand Alliance (APGA) who in Lagos berated heavily the cabal that has mandated itself to work for Yar'Adua.

The activities of these men who Umeh tagged enemies of the growth of democracy in Nigeria is what he sees as a big threat to the peace of the nation. And he warned: 'If anything happens to truncate the democracy we fought hard for, these people will be held responsible'.

Umeh also feels bitter with the acting president, Dr. Goodluck Jonathan for not acting fast to have ousted the ministers who are pro-Yar'Adua and have been causing so much confusion in the system. 'If Jonathan had acted fast he should have sacked the ministers that today foment trouble for the whole nation. But I don't blame him because he was being cautious and people would have seen him as out and in waiting to usurp the position of his boss. It was his sense of proper conduct and respect for his boss who was away that brought us into this. If Jonathan were the rascally type of politician who are so assertive of power, he would have done that before we got to this position and the trouble would have been averted.'

But on the speculation and grapevine facts that Jonathan has been mandated by the cabal to take orders from the wife of Yar'Adua, Turai, Umeh said it is absolute nonsense because 'there was no time Nigerians voted Turai as president or Vice President or even as First Lady.

The constitution that created the office of the president never had any place for the wife of whoever will be there. Because the law and the framers of the constitution knew that human beings have frailties, they envisaged that something might happen to the president, the governor or the local government chairman as to stop him from functioning. So it provided that for a candidate to run for any of these elective positions, such must fulfill the requirement of picking a running mate who eventually becomes the acting officer or substitute when he is no longer there. So, I can't understand why Jonathan was put there to enable Yar'Adua qualify to be president, and at a time he should take over, a cabal will hold the nation hostage by ever imagining that Jonathan should take orders from anybody apart from the president'.

Back to the activity of the cabal, he insisted that any human being that plays politics with the misfortune of another must suffer the consequences. 'It is rather very callous and improper that a human being who you call your boss is ill and you make profit out of it. I have many reasons to believe that Yar'Adua is not the one doing all these things. And I also believe like every reasonable Nigerian would that, these people, whether family members or not that trade on Yar'Adua's ill health do so for their personal benefit. What they do is not on the orders of Yar'Adua but motivated by the intent to profit from someone's misfortune. Who is even sure Yar'Adua is in a conscious state to give them orders. That is why I say and insist they must go to hell'.

From the developments of this week after the announcement that Yar'Adua is back Chief Umeh believes that Yar'Adua is actually very ill and maybe not talking to direct affairs. 'Or how else would you describe a situation where a president who was away for 93 days was brought back in the middle of the night. The plane that brought him parked literally in the bush along the runway, where a plane should not stop and somebody was transferred into an ambulance smuggled into the airport in darkness and driven away. Moreover, the return of this man who Nigerians love and wish recovery apart from the cabal should have called for jubilation. The streets would have been lined with happy and jubilant Nigerians. But what we saw was a retinue of security guards made of soldiers lining the airport into Abuja city, as we read.

The refusal is a pointer that the president is gravely ill and should transmit a letter to the National Assembly over his incapacitation. This is just beyond any doubt that the president is incapacitated. I have to say it that it is hard to believe he is alive or has come back. And if he indeed came back and can neither see the Vice President nor address Nigerians in a broadcast, then there is so much doubt about it. Even Segun Adeniyi, his Special Adviser that spoke to Nigerians I am sure did not see the man, so how did he get the message he gave us supposedly from Yar'Adua? But the most plausible conclusion is that the president is surely not in a position to return to office, at least now. That is a good reason Jonathan should be allowed to continue as acting president until otherwise.'

To buttress his position that the cabal is doing great damage to the democracy, Umeh hailed the amendment of Section 145 and others by the Senate even on the day Yar'Adua returned and assured that with the section providing automatic transfer of power to the Vice President when the president is invalid without any letter transmitted to NASS, the nation is coming round to solving the problem the Yar'Adua power cabal has plunged the nation into. It is improper that the cabal should use Yar'Adua's health to hold the nation hostage. And if they continue to profit from the president's ill health, God will send all of them to hell for such evil.'