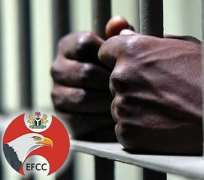 SAN FRANCISCO, July 09, (THEWILL) - Timothy Elerewe and Adegbuyi Ayodele, former chairman and secretary respectively of the Nigerian Union of Journalists Correspondent Chapel, Abuja, were on Tuesday remanded in Kuje prison by Justice Suleiman Belgore of the High Court of the Federal Capital Territory, Abuja following their arraignment on a 5-count charge that borders on conspiracy and criminal breach of trust preferred against them by the Economic and Financial Crimes Commission..

Since then, members of the Chapel alleged that they neither got the land nor had their money refunded to them.

The accused persons pleaded not guilty to the charge.

However, counsel to the first accused person, Esther Uzoma made an oral application for bail and pleaded with the court to admit the accused persons to bail.

However, Justice Belgore insisted on a formal application for bail and adjourned proceedings to July 25, 2013, while remanding the accused person in Kuje Prison.