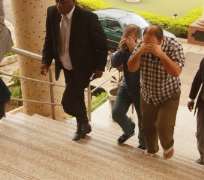 SAN FRANCISCO, July 08, (THEWILL) - A Federal High Court sitting in Abuja has been told that the three Lebanese, standing trial for terrorism-related offences over the busted Hezbollah armoury in Kano, had admitted that they received military training from the Hezbollah group in Lebanon, saying the training is mandatory for all young Lebanese.

The Acting Director of Public Prosecution of the federation, Simon Egede, on Monday, while disclosed this, also informed the court that the three accused persons - Mustapha Fawaz (49 years), Abdullahi Thahini (48) and Tahal Roda (51) - facing a six-count terrorism charge and are being tried along with two of their companies - Amigo Supermarket Limited and Wonderland Amusement Park Resort - allegedly confessed to having financial relationship with Hezbollah.

Opposing the bail application of the accused, he cautioned the court against granting them bail, saying the charge of terrorism for which they were being tried was a serious offence, requiring them to present a special circumstance on which the court could allow them bail.

"From their statements, they confessed to some of the charges against them. We have annexed the statements written in their writing. Their training by a terrorist organsation and their financial support over the years.

"We have exhibited samples of the US dollars found in the custody of one of them which was in furtherance of their financial support to the international organisation. At the trial, we will lead evidence to establish that," Egede said.

Maintaining that the prosecution had presented sufficient evidence to warrant the refusal of the bail application, Egede said the ammunition found in their custody "is sufficient to sustain a civil war."

He listed the weapon to include mortals, land mines, AK 47 rifles, anti-tank rocket launchers, hand grenades, among others.

On the possibility that they could abscond, he told the court that the accused persons possess dual citizenship and could easily run to their country of birth if granted bail, saying some of their alleged accomplices had already escaped and are currently at large.

He added that one of the accused was arrested at the airport, while planning to board a plane and flee the country.

The lead prosecution lawyer urged the court to refuse the accused persons' prayer that their sealed companies be unsealed.

He argued that the opening of the companies would jeopardise ongoing investigation on the premises.

Arguing the bail application earlier, defence lawyer, Robert Clarke, SAN, had urged the court to allow his clients on bail because they had been held in state custody for about two months

He assured that they would neither escape trial nor tamper with prosecution's witness, saying the Lebanese ambassador was willing to stand surety for the accused persons.

However, the prosecutor urged the court to ignore that assurance since the ambassador has diplomatic immunity and could not be prosecuted even if he gave such undertaken and reneged.

Clarke, while replying on point of law, denied Egede's claim that his clients confessed to the crime.

He said the statement referred to by the prosecution as confessional statements were mere history of the life of the accused persons.

Clarke said their admission to having been trained by Hezbollah was in respect of the training they had while growing up in Lebanon around 1991.

He argued that if his clients, who grew up in Lebanon where young male children were compulsorily subjected to military training could be called terrorists, it meant that all Israelis, who were also subjected to such training, could also be held for terrorism.

"It is not confessional statement, but mere history of the accused persons," he argued.

Clarke urged the court to dismiss Egede's argument and admit his clients to bail.