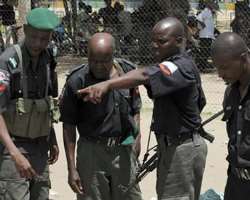 SAN FRANCISCO, July 08, (THEWILL) - Indications emerged on Monday that the Delta State Police Command may have recovered the remains of the Itshekiri youths who were killed recently during the crisis between the Ijaws and Itshekiris in the Warri North Local Government of the state.

Some of the remains which were buried by the attackers were were said to have been exhumed from the various communities burnt by suspected Ijaw militia youths who were agitating for the chairmanship position of Warri North Council and handed over to the police.

The Itshekiri National Youth Council (INYC) had alleged that 13 persons were killed by Ijaw militants during the attacks on Itshekiri communities.

INYC Chairman, Hon David Tonwe, who was addressing his kinsmen, had said that they lost 13 indigenes in the unprovoked attack, which also left several villages sacked.

" We have lost 13 of our brothers and sister; let's all ensure that it does not escalate.

"We have just come out from crisis and we are not prepared to take that road again. Nobody who witnessed that crisis would encourage what just happened.

"So, I want to appeal to everybody to remain calm and hope that the law will take its course," he said.

His counsel came as the President of National Association of Itsekiri Graduates (NAIG), Ms Alero Tema, said the youth groups were pained by the latest carnage in the area.

But the Ijaw People Development Initiative (IPDI), in a statement signed by its National President, Comrade Austin Ozobo, Board of Trustees Chairman, Cletus Itari and Secretary, Peter Luke, has advocated a rotational arrangement to end the impasse over the Warri North Council chairmanship seat, saying the arrangement will ensure lasting peace among Itsekiri and Ijaws in Warri and its environs.

Maintaining that this is what is obtainable in Warri South West and other places, the group urged Governor Emmanuel Uduaghan to adopt the arrangement in all political offices, including State House Assembly and Commissioner positions, among others.

Arguing that the only obtainable solution was to adopt the rotational arrangement of the council highest seat, among others, IPDI said the governor should not delay in doing this in his effort to ensure that lasting peace returns to the troubled area.

''It is not time to exert energy on going after perpetrators, let’s face the reality, there is no fire without a smoke.

"Let’s ensure that the immediate cause of the uproar should be timely addressed, then later we can be looking for whoever we want to look for," IPDI said.

''We urged both parties to sheathe their sword and employ dialogue to settle out their differences.

"We want a transparent settlement. Let the governor avoid bias and being treacherous over the harmonisation process of both parties. Let’s forget about the issues of minority or majority in managing the crisis.

''We want something obtainable to be done so as to bring everlasting peace to Warri and its environs.

"We call for calm among both parties and avoid anything capable of degenerating the crisis in question.

''I call on the Itshekiris to release every Ijaw person they have taken hostage to avenge for the attack on their communities and likewise the Ijaws to do same as killing or abduction of innocent people will only end up escalating the problem on ground.