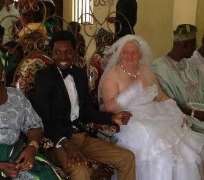 We've had several occassions where young Nigerians get married to old foreign women in the past, but this just seems to surpass all of the ones i've seen. This woman is old enough to be the groom's grandma. What do you think of this marriage?
[36ng]