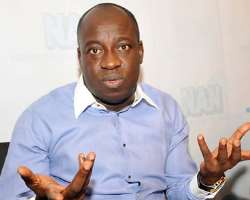 SAN FRANCISCO, July 07, (THEWILL) - The Minister of Sports and Chairman of the National Sports Commission (NSC), Mallam Bolaji Abdullahi, has set up a panel to probe the crisis over match allowance involving the players of the Super Eagles in Namibia.

The footballers had rejected the allowance approved for them by the Nigerian Football Federation (NFF) after two away games with the national teams of Kenya and Namibia as part of the qualification for the World Cup.

As a result of the protest, the footballers initially refused to board the plane for Brazil to participate in the FIFA Confederation Cup which ended recently.

A statement issued by the Special Adviser (Media) to the Sports Minister, Mr. Julius Ogunro, said the panel will be chaired by the Chairman of Thisday Editorial Board and former Special Adviser to Late President Umar Yar’Adua,Mr. Segun Adeniyi, who was also a member of the Presidential Task Force, which was set up to ensure Nigeria’s qualification for the 2010 World Cup.

The statement listed other members of the panel to include Onoche Anibeze (Group Sports Editor, Vanguard); Aisha Falode; Shehu Dikko (Member of the League Management Company); and Ayo Oshuntokun (former Mansging Director of the News Agency of Nigeria (NAN))

The terms of reference of the panel are to determine the immediate and remote causes of the crisis over the match bonus; develop a code of conduct for players on national assignments; and any other recommendations that may be deemed necessary.

The panel, according to the statement, would be inaugurated on Thursday, July 11 and has two weeks to submit its report.