'Get Involved In The Agricultural Sector' Dr. Okubor Urges Deltans 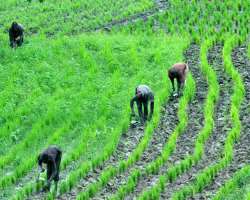 
The Chief of Staff, Government House and Protocol, Asaba, Dr. Festus Okubor has enjoined deltans to tap into the enormous agricultural potentials of the state to create wealth and jobs for the youths.

Dr Okubor who stated this today [2/7/2013] in Illah while inspecting a Rice Plantation at Raymos Guanah Farms said that the agricultural sector had vast potentials to create financial boost for the nation's economy.

He explained that 'the agricultural sector, as the wealth of the nation will provide vast employment opportunities for deltans to be self employed rather than wait for government jobs.  it is important for Deltans to tap into this sector to create financial stability for themselves'.

While commending the Chairman of the farm, and former Commissioner of Lands, Survey and Urban Development, Barrister Raymos Guanah for venturing into the agricultural sector, Dr. Okubor assured him of the government's support and cooperation in ensuring the success of the venture as it would help to improve food security in the state.

In a brief remark, Barrister Raymos Guanah, Chairman of the farm who described the plantation as the biggest rice farm in the state stated that the Rice Plantation which occupy a land mass of over 80 hectres was mechanized thus making preparation and planting faster and safer.

He disclosed that the produce which has been planted would be cultivated within four months explaining that the rice earthlings planted was selected to fit the swampy environment.

Honorable Guanah further stated that an irrigation project was on at the farm explaining that the project would supply water to the earthlings during the dry season.

Honorable Guanah called on the state government to support the project as it would also serve as a means of job creation and an economic boost for the state explaining that 'more equipment and machineries were needed to improve the activities in the plantation.'