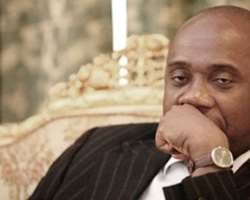 
Rivers State Governor, Rotimi Chibuike Amaechi, on Monday blamed the recent controversy over oil wells between his state and Bayelsa State for his political travails.

According to the governor, he is suffering because he refused to allow the ceding of oil wells in the state to neighboring states in the South-south and South-east geo-political zones.

This came as, said all members of Amaechi's team would quit the Peoples Democratic Party (PDP) if Amaechi decides to leave the party.

He spoke when the people of Opobo/Nkoro Local Government Area paid him a solidarity visit at Government House, Port Harcourt.

They were led on the visit by  former Deputy Governor of the state, Mr. Gabriel Toby, and the Chairman of the House of Representatives Committee on Petroleum Resources (Downstream), Mr. Dakuku Peterside.

Peterside represents Andoni-Opobo-Nkoro Federal Constituency in the House of Representatives.

' We need protection. This is our struggle for protection. In 2007, we were number one in oil and gas production in the region. By 2010, we were made number two and today; we are struggling to maintain that number two position.'


The governor reeled out some development projects he had undertaken to lif the lives of the people. He said his administration had invested N500 billion on road projects alone between October 2007 and now.

He also promised to complete the ongoing Ogoni-Andoni-Opobo Unity Road before the end of 2013, as well as complete the Opobo Fish Farm, in order to create job opportunities for youths from the area. The governor urged the people of the area to continue to pray for him and stand by him wherever he decides to go.

Amaechi also appealed to the federal government to complete the Bodo-Bonny road project to make it easier for the people and residents of Bonny Island of the state to access the area by road.

Earlier in his address, Toby had said Amaechi would remain the governor of the state until the expiration of his tenure no matter the plots of his political detractors.

Toby lauded the governor over his decision to not only to continue work but to expand the scope of the Unity Road, to include Nkoro communities, after the expiration of the administration of Dr. Peter Odili, who started the road project in 2005.

He described as 'blind people', those who alleged that the administration of Amaechi had not completed any project that is beneficial to the people of the state.

But addressing journalists later, Peterside said he and other members of Amaechi's team would stand by the governor in whatever decision they reached on their continued stay in the PDP.

His words: 'I will. I didn't say I may. I am definite. I will. The governor is still a member of the PDP as we speak. In politics, like in many other engagements, you have a team. It is worse in politics. In my team, Governor Amaechi is the leader and we all subscribe to his leadership.

'For him to make up his mind to leave, means that team would have sat back (and I am part of that team) and agreed that our team will leave because whatever is happening ion PDP or any other party does not represent our vision, aspiration, or will not provide us a conducive platform to achieve the changes we want to bring about. So, for him to make that decision public would mean that we all have sat in the house, analysed the situation and made the decision and all members of the team will leave. But as we speak, we are still members of the PDP.'

He, however, noted that the PDP in the entire county was in disarray and warned that if the no concrete steps were taken to reconcile members, the party would lose the 2015 elections.

He said: 'If we say the PDP in Rivers State is in disarray, are we sure the party across the nation is not in disarray. The president himself acknowledged that the party in the country is in disarray and decided to lead the team that will try to reconcile everybody in the party so that we will be able to win an election. It is in that line that Chairman of the Board of Trustees (BoT), Chief Tony Anenih, led a team that went from state to state trying to reconcile different factions in the party. So, it is not just in Rivers State.

'The implication for 2015 is that if there is no sincere and definite programme for reconciliation, the party will go into that election and lose.'

Peterside also said the state Commissioner of Police, Mr. Joseph Mbu, had gone beyond the scope of his duties in the state and had tried to assume the position of the governor of the state.

'The commissioner of police Rivers State has gone out of the contemplation of the law, the constitution, in the discharge of his duties and has gone wild abusing the governor of Rivers state, calling him unprintable names. This is most unfortunate. The Commissioner of Police is first a public servant who is on oath to serve the people of Nigeria. He is an agent of the Inspector General of Police.

He therefore called on the Inspector General of Police and other relevant agencies to immediately withdraw Mbu from the state.

'I will advise the inspector general of police, the police service commission, the Nigerian Police Council, and indeed the president of the country, to as a matter of urgency, withdraw Mr. Mbu from Rivers State, so that we can enjoy peace again in Rivers state. since he got involved in the internal politics of Rivers State, we have had rising cases of kidnap, politically sponsored violence and other criminal activities. I am appealing to the President, and others to remove Mbu out of Rivers State as a matter of urgency, if you want peace and the economy of Rivers State to thrive,' he said.