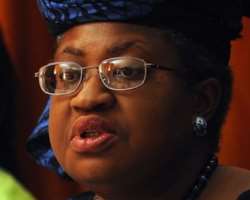 
By SaharaReporters, New York
SaharaReporters received a statement signed by Paul C. Nwabuikwu, a senior aide to Nigeria's Finance Minister, Ngozi Okonjo-Iweala, in response to our recent report on the dire financial crisis in Nigeria. Instead of addressing our factual reporting of the declining fortune of the Nigerian economy, the minister resorted to her accustomed pettiness and name-calling.

She recently exhibited the same trait when she got Yushau Shuiab, a spokesperson for the National Emergency Management Agency (NEMA), fired from his job after he wrote an article questioning her lopsided appointments and accusing her of abuse of office. Ms. Okonjo-Iweala comes across as intolerant of facts, blinded by an ambition to be hailed in foreign circles as the answer to Nigeria's economic woes, and driven by an excessive opportunism that disdains stark reality. We affirm that our recent report, like others in the past focusing on the Nigerian economy, was the product of painstaking investigation, undertaken to expose corruption, lies and deceit perpetrated by Nigerian officials to hoodwink unsuspecting Nigerians that a transformation was taking place in their lives. This website speaks to numerous knowledgeable and reliable sources, in government and out, within Nigeria and abroad.

Their conclusion is that the so-called transformation trumpeted by Ms. Okonjo-Iweala and other functionaries of the Goodluck Jonathan administration is phony. Using their insight into the policies and actions of the government, they insist that Nigerians are materially worse off today than at any time in the recent past as a result of economic mismanagement and large scale graft, the hallmarks of the Jonathan regime.

During Ms. Okonjo-Iweala first tour of duty as finance minister under ex-President Olusegun Obasanjo, she pursued an aggressive debt repayment agenda, handing over more than $12 billion of Nigeria's scarce funds to repay debts of doubtful origin. To justify that scam against the Nigerian people, Ms. Okonjo-Iweala boasted that, with the debt payment accomplished, Nigeria was in a position to save $1 billion per year, pledging that the monies would be invested in developing infrastructure.

In 2007, when Ms. Okonjo-Iweala was giving esoteric speeches about the economic magic she and her colleagues were achieving for Nigerians, the exchange rate of the naira to the US dollar was 120 to one; today it is 160 naira to a dollar.

At a 2007 TED conference, Ms. Okonjo-Iweala disclosed that Nigeria had 40 billion in foreign reserves. Today, with rising oil prices in the international market, she admits that Nigeria only has $48 billion in the reserve. Ms. Okonjo-Iweala has stepped into the role of chief obfuscator on the economy, encouraged no doubt by her ability to get away for so long with deception on and misrepresentation of the true condition of the Nigerian economy. We, however, refuse to be impressed by her steady string of fictional claims about a supposedly vibrant Nigerian economy.

It ought to be recorded that Ms. Okonjo-Iweala oversaw an era of some of the most reckless acts of corruption and heists of the Nigerian commonwealth in her first four years as finance minister under Mr. Obasanjo's hypocritical administration. Under her watch, Nigeria attained bogus economic progress where numbers, charts and fake stats were frequently displayed and deployed to fool the unwary and the gullible.
Meanwhile, under Mr. Obasanjo's and her noses, billions of dollars of public funds were stolen in the name of 'investments' to upgrade Nigeria's electric grid. She helped to dispense import waivers to dubious businessmen and churches, an exercise that cost Nigeria a fortune. Since Ms.
Okonjo-Iweala's second coming as minister, complete with the bizarre title of 'coordinating' minister she crafted for herself, Nigeria's economic condition has worsened. Tell, where is the evidence of economic growth and buoyancy when almost six states of the Nigerian federation have been paralyzed by Islamist insurgency? Where is the sign of economic vitality when half of Nigeria's oil production is stolen by crude robbers, most of them elements close to President Jonathan? Which foreign investors are pouring money into a country where the electrical grid has  nearly collapsed and at a time when the few local industries are moving to countries like Ghana and Benin?

Does Ms. Okonjo-Iweala calculate that most of the 'vulture capital' operations run by some of her former colleagues that are selling bonds to Nigeria at cut throat prices can be considered investors even when they are already pulling out their funds and ripping Nigeria apart? Where else in the world would an economy grow at 6.5% and yet fail to provide jobs for more than half of its youths? How is the economy working when Nigerian soldiers participating in peacekeeping operations in neighboring countries have to beg locals for food? If the Nigerian economy is 'sound,' how come workers are being owed salaries? Why have many pensioners not been paid their entitlements after retirement? What explains the fact that ministries and parastatals have lately not received their allocations? If the economy is sparkling, why are Nigerian roads so bad? Why were they not fixed in the years Ms. Okonjo-Iweala has been practicing her economic wizardry? Which economy can survive the greed of a President Jonathan and his inner circle?

Today, Mr. Jonathan has pardoned corrupt former governors and other officials that Ms. Okonjo-Iweala condemned in 2007; the pardoned men now sit across the table from the president and his cabinet to further destroy Nigeria. Which economy can survive such full-throttle promotion of corruption? The questions for Ms. Okonjo-Iweala are many, but we are content to ask her to provide to the public a profile of the last four years of Nigeria's so-called foreign reserves? If Nigeria has $48 billion in such reserves and it is a sign that our economy is buoyant, why does Nigeria have to borrow, even if interest-free loans? Why does the minister designate the foreign reserve in US dollars but the so-called 'Excess Crude' account in naira? And if the excess crude account was N5 billion, what was it when Ms. Okonjo-Iweala became finance minister? We are surprised that it took Ms. Okonjo-Iweala several years to understand that Saharareporters is 'activist media,' a tag we wear as a badge of honor.

Our mode of reporting scrutinizes official versions of events; we question the actions and policies of government officials; we have developed an ever-growing network of sources who avail us of the innermost secrets and deals of those in power because they trust us to report fearlessly and to protect their identity; we believe in speaking truth to power; and we always crosscheck statements made by sources before publishing accounts. We continue to demand openness and transparency in the conduct of governmental affairs; and we demand that Nigerians be allowed to feel the impact of any so-called economic growth, not in carefully manipulated press statements, bar charts and economic ratings and projections, but in the manner it impacts positively on their daily lives.

Ms. Okonjo-Iweala may lash out all she wants and choose to operate as an economic hit-woman, but we are not fazed. We will continue to beam a searchlight on her handling of the economy, including calling attention to her hypocritical role in empowering a cartel in the fuel import business, a cartel whose depredations she criticizes in the media when it suits her agenda.

Full Text Of Mrs. Okonjo Iweala’s Response to SaharaReporters Report on the Nigerian economy: ECONOMY: THE LIES OF SAHARAREPORTERS

We have received several enquiries about a story titled 'Nigerian Government broke; targets pension savings' posted on the website of Saharareporters. The story, like many other recent articles by Saharareporters purporting to be exclusive stories on various aspects of the Nigerian economy, is a complete fabrication.

As Nigerians know, the administration of President Goodluck Jonathan recently presented its mid-term report which is a forthright account of the achievements as well as challenges facing the economy. The country has $48 billion in reserves, including N5 billion in the Excess Crude Account to help shore up the economy. So the idea that the country is broke is alarmist. It is true that the country is experiencing some revenue shortfalls that everyone knows about due to oil theft for which the President is taking some serious measures.

Also, contrary to the claim in the story that the country has borrowed from local and international banks to finance recurrent spending, the Jonathan administration has in fact reversed the tendency of borrowing to finance recurrent as was the practice in the past. Also untrue is the claim that the country has been downgraded by international ratings agencies. In fact the truth is the exact opposite; ratings agencies and international investors have consistently stated, through various platforms, that the Nigerian economy is a well-managed one with good prospects in the medium and long term.

Regarding the country's debt situation, the overall picture is positive as the Coordinating Minister showed clearly in her recent well publicized statement. The multi-dimensional strategy adopted by the Jonathan administration is leading to positive outcomes. The level of borrowing has been brought down, bonds are being paid off through a sinking fund and the country is not taking the kind of high interest loans that led to the debt burden which existed before the historic Paris Club debt deal. The Borrowing Plan which was approved by State Governors and the National Assembly is focused on financing power transmission projects, inter and intra city rail projects, dams and other key infrastructure.

The notion that the Jonathan government is 'eyeing' the N3.4 trillion pension funds to finance deficits underscores the desperation of this 'activist' medium and its sponsors. It is a total invention. In fact, the government is currently engaged in strengthening institutions and critical processes in the sector to enhance security and stability of the funds.

With this latest outing, Saharareporters has reinforced its well-earned reputation as a discredited purveyor of falsehood.