'Senator Ewherido's Death Is Not Ordinary' 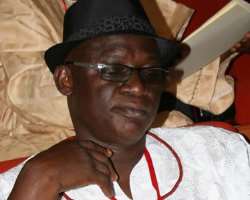 SAN FRANCISCO, June 30, (THEWILL) – Indications emerged on Sunday that the death of Senator Pius Ewherido, representing Delta Central Senatorial District, in the National Assembly, may have been the result of a spiritual attack.

His death, which came few months after he was suspended along with three others by the Chief Tony Ezeukwu-led Delta State chapter of the Democratic People’s Party (DPP), is still shrouded in mystery with controversy trailing the manner of his death.

The Senator, who was the Delta State All Progressives Congress (APC) governorship candidate- designate for 2015 governorship election, was said to have slumped three days ago while answering a phone call with blood gushing out of his mouth and nose.

He was said to have been rushed to the National Hospital, Abuja where he eventually died on Sunday.

An impeccable source however told THEWILL that immediately the Delta State governor, Dr. Emmanuel Uduaghan, was informed of Ewherido's condition,the governor quickly arranged a private jet to fly the senator to Germany for treatment but he died before the help could reach him .

But a source close to the late Senator said he may have been a victim of spiritual attack from a political opponent.

Ewherido was said to have been in a running battle with the suspected political opponent with whom, along others, he contested the PDP senatorial primaries for the 2011 election before he defected to DPP on the platform of which he won the senatorial election.

The source said that the same Urhobo politician was allegedly responsible for the spiritually attack of a Sapele-born oil magnate who is down with stroke following the PDP primary elections in 2007.

“My brother, the death of Senator Pius Ewherido is not ordinary," the source said, adding "fingers are pointed to one person who is also said to be responsible for the attack on another Urhobo politician."

According to the source, "Delta State has lost a gem, our only hope for 2015 election. The most painful aspect of it all is that he has already got the ticket to fly the APC governorship flag in the state and now look at what has befallen us."