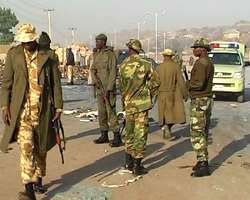 
The Joint Task Force have shot dead at  least  40  suspected Boko Haram terrorists at the weekend  during a shoot out  in  Zabarmari ward of Jere Local Government Area of Borno State, Pointblanknews.com gathered.

Pointblanknews.com also gathered that another set of three suspected Boko Haram terrorists who were on their way to Jigawa state and other parts of the northern states on a suicide mission were captured  by  vigilante youth group popularly referred to as “Civilian JTF”  at  Borno Express Motor park.

“The Vigilante youth group  later handed over the three suspects  to the JTF unit. One of the suspect confessed that they were from Bama Local Government Area on a suicide mission to Jigawa and other states in the north. Another suspect had reveal that, all their weapons  have been transported to the target areas waiting for them to arrive before they were apprehended”. A security source said.

A press statement to defend the activities of the youth group and signed by the JTF Spokesman, Lieutenant Colonel Sagir Musa and made available to newsman yesterday reads:  the Task Force support and commend the heroic and patriotic efforts of citizens and residents of the state especially the youths who are daily rising against Boko Haram Terrorism in the state.”

The JTF spokesman added,” we wish to allay the fears and concerns of some members of the public as regards the activities of the youths popularly known as “Civilian JTF” in the state, adding that  the JTF has since commenced the process of monitoring, guiding and regulating the activities of the vigilant youths with the view to making them operate within the ambit of the law.

This move according to the JTF,” is in order to making them more useful in fighting Boko Haram Terrorism in Borno without becoming a nuisance to the society”.

Pointblanknews.com  gathered that  Zabarmari is  one of the notorious hide out of  Boko Haram terrorist where security operatives had in the past engage insurgents in serious gun battle.

According to a security source who spoke  on condition of anonymity, “over the weekend, we received an intelligence report that several number of Boko Haram terrorists have regrouped and were  hiding in Zabarmari ward, we mobilized our troops to the area, and on reaching the place, the suspected terrorists upon noticing our presence, began chanting  “Allahu Akbar” (God is Great) and started shooting sporadic at the JTF soldiers, we therefore had no option than to reply the attacks. We succeeded in killing about 10 of the suspects.

“We decided not to take away any of their corpses as we left them in the area, but the following day when we mobilized our men to the area, we found out that hundreds of the terrorists were at one of the grave yards burying their dead ones, and as we approach the scene, some of them started shooting at our troops which led to the exchange of gun fire and we killed over 30 of them”. He stated.

“As I am talking to you now, our men are still in Zabarmari hunting for any suspected terrorists who might have escaped the deadly encounter”.The source said.