ISSUES BORDERING THE PREY ON STUDENTS BY LEWD LECTURERS 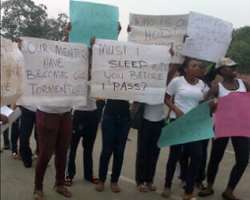 It is in situations like this that one begins to wonder whether there is any hope for morality in our country. I am talking about such cases where we see perversion in a place it should have no business manifesting. Where the debasement of decency takes root in a place that should instill same; quash that thought, this is not about the churches.

We were last Tuesday returned to our institutions of higher learning.

We were so conveyed back by the action of students from the Creative Arts department of the University of Lagos who embarked on a protest march against the excesses of their randy lecturers.

If they say 'excesses', then excesses is really the word. We all know that before students of nowadays can get themselves to carry out a protest, the situation must have really got out of hand. It is no longer like the students activist days of Labaran Maku and company where a little infraction against students and their activities is attended by a fierce aluta continua.

The Unilag students in their hundreds, armed with placards bearing messages hinting at the lasciviousness of the lecturers, alleged sexual harassment and other allegations of misconduct against their lecturers. The students told that lecturers in their department have made life difficult for them by making sex with them a major criterion for passing examinations.

They also alleged that male students who obviously cannot offer sexual favours to their lecturers were made to part with exorbitant sums of money, in place of sex, if they wanted to pass their exams. This, we called 'sorting' during our days in school, I wonder what it was nicknamed in yours. The money paid by the male students form part of what the lecturers use to finance their adulterous lifestyle.

That rings a bell, doesn't it? That was how they took us back. Those who graduated from school in the recent past will by this, have their minds cast back on how it was during their times in school. This issue has always been there. It won't be wrong to surmise that the ill tradition was handed down to today's crop of lecturers by the ones who had retired or are probably dead. How? Today's lecturers were yesterday's students who watched them do it glaringly.

This vice accounted for a major reason cultism and cultists reigned supreme.

The reduction in incidences of cultism in our tertiary schools,is attributable to lecturers learning how to manage their libido. Hence the students' unwillingness to be members of cults since they have no lecturers to scare away from their valentines.

It then appears that raunchy lecturers are taking advantage of the lull in cult activities to go after girls arbitrarily. During the heydays of cultism in schools, lecturers focussed their research efforts on finding out which female student is dated by a cultist so as to back off. I hope lecturers who are demanding sex from students are not trying to buoy cultism?

Talking of research from our academia, we may have chanced into the reason behind our not seeing much of their research efforts to address the pervasive and overwhelming problems plaguing our society. Their self-inflicted distraction, occasioned by the lust for female students, is apparently responsible for this.

For it is impracticable for a man who maintains a lustful way of life to successfully conclude a serious research effort. Having a harem of courtesans distracts men from their goals just like King Solomon was turned away from his devotion to God who so blessed him with wisdom.

The chronic womaniser of a lecturer apparently has a wife with children who may still be teens. He will be so calculating on how he goes about his philandering such that his family will not be in the know. Besides, he will equally contend with how to assuage or deal with a mistress who wants to blow the lead off his extra-marital activities, just like we read in the news some 48 hours after the Unilag protest.

It was reported of the personal secretary to a professor at the Delta State University who demanded N100,000 from her 'professor lover' as settlement for his having an amorous relationship with her or be ready to face public scandal. These are distractions amidst which no real research result can be achieved.

And what is an academic without an impacting research to his credit.

Now you can better appreciate why our universities are always at the lower rungs of world universities rankings.

My sweeping postulations are well intended. This is owing to the fact that those who are innocent of pestering students for sex know what their colleagues are doing yet they elected to look the other way.

What stops them from giving the left leg of fellowship to the bad eggs among them?

Some of these comrade of theirs even dare their victims to go and report and see for themselves that nothing will come out of it. It is to the extent that even junior lectures dare their prey to report them to the Senate- a congregation of professors in a university. And truly, students who thought such a bluff soon learnt it wasn't. You can now see the complicity.

Moreover, an Igbo adage holds that when a finger is dipped into oil, it soils the rest fingers. Lecturers can't have reprobates among them and expects to be without blame. The blame is already there by the existence of black sheep in their midst.

I remember the case of a friend of mine who refused to marry a lecturer who was seriously seeking her hand in marriage because she had come to believe that all lecturers are casanovas and that she wouldn't want to share her husband with students. That is how such a respected profession has been demystified by lecturers who can't just be contented with the wife they have at home.

This should make the Academic Staff Union of Universities(ASUU) rise to the occasion by riding our varsities of this menace that shouldn't be heard of it. If there is sincerity of purpose on their part, ASUU and other relevant authorities have all it takes to rein in these sexually immoral lecturers. This does not exonerate those in polytechnics and colleges of education, parallel bodies in these schools of higher learning should equally seek out and punish the erring lecturers.

Some of them are so dubious that they are only attracted to female students they suspect to be virgins. They identify these ones through their pattern of dressing and demeanor. This is one of the reasons I am not always fascinated by the argument that the kind of dresses female students put on are responsible for the passes they are getting from the lecturers.

Meanwhile, since the popular position is that the manner in which female students dress is what is turning weak lecturers on, students would be well advised to dress properly while on campus. After all, some higher institutions are already adopting a code of dressing for their students.

Relevant stakeholders must work to end this aberration that has gained ground in our higher institutions. Parents who, through brawn and toil, saw their wards through tertiary institutions, should not be rewarded by making their hitherto HIV-negative daughters turn HIV-positive at the end of the day because of some licentious lecturers.

Correction in educational institutions is such that each of primary, secondary and tertiary schools have a role to play in inculcating discipline on a person. Tertiary institutions should not be made a weak link in this circle. They shouldn't ruin the good works that have already been done on their students by primary and secondary schools.

Oh, I forgot that a proprietor was recently caught defilling an 11-year old pupil in a toilet. Hmm, whither morality in this country?