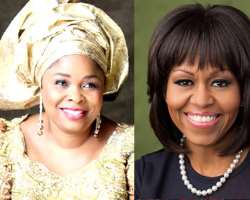 While in Contemplation on the extensive psychological, social and economic damage caused by the phenomenal rate of sexual violations of minors especially the girls by adult sex predators in Nigeria, I was rudely interrupted by a loud broadcast by a local television in Nigeria that is publicly funded whereby the wife of President Goodluck Jonathan was shown addressing a crowd of people made up mostly of gorgeously dressed women, somewhere in Port Harcourt, the River State Capital.

For some moments, I watched the broadcast of the colourful rally by the wife of the President to see if she could dwell for some minutes on the menace of rape of teenagers by adults in Nigeria, but that was none of her concern.

The glamorous event by the wife of the Nigerian President which was bankrolled apparently with tax payers’ money was interpreted by the media as the unofficial kickoff of the 2015 presidential campaign of President Goodluck Jonathan.

President Jonathan, it would be recalled, has not declared his intention to vie for another term in 2015 but his Special Adviser on political matters-the Adamawa state-born lawyer-Mr. Ahmed Gulak has severally affirmed that President Jonathan would contest.

On June 19th 2013, when the wife of the Nigerian President inaugurated what is called the South-South zonal secretariat of the Women for Change and Development Initiative-her pet project, she took plenty of time to ask the women and people of the region to vote for her husband but spent less than fleeting seconds to highlight the need for women to become sources of peace in their homes.

At the palace of the traditional ruler of the Nye-new-eli Rumueme Kingdom, Eze Omunakwe Nsiri, the wife of Nigerian President explicitly showed that her visit was political.

Her words; “I am here to thank and appreciate the role you and my people of River State played in voting for my husband in the 2011 presidential election. Rivers people voted massively for my husband. I am your daughter and my husband is your son. I want you to support him when the time comes. I know you will not disappoint us we, on our part, we will never forget you”.

Remember that the wife of President Jonathan just like wives of previous Nigerian rulers, has assumed the unofficial title of the first lady even though most Nigerians now know that the Nigerian presidency spends a fortune to run this unconstitutional office with all the full compliments of an executive office holder.

The “office” of the first lady of Nigeria, I am told, is staffed with some of the best schooled experts in different fields especially in public and media relations.

The title of First lady as we all know originated from the United States of America where till date the holder of that symbolic title, the wife of the President of the United States of American President Mrs. Michelle Obama does not enjoy these monumental executive privileges that the Nigerian President’s wife enjoys. She also does not engage in political battles on behalf of her husband.

From simple research in the Wikipedia, the online encyclopedia, we are reliably informed that the word first lady is an unofficial title used in the United States of America for the wife of the President.

The concept of first lady originated in the United States where one of the earliest references was applied to Mrs. Martha Washington.

According to historians, in an 1843 newspaper article that appeared in the Boston Courier, the author Mrs. Signorney, discussing how Mrs. Washington had not changed even after her husband George became President, wrote as follows; “The first lady of the nation still preserved the habits of early life. Indulging in no indolence, she left the pillow at dawn, and after breakfast, returned to her chamber for an hour of study of the scriptures and devotion”.

The above is necessarily how a good wife of the President ought to carry herself with humility and devotion knowing that the symbolic title she carries, carry no constitutional support or validity. Although I acknowledge the scientific fact that no two people are the same but two persons carrying same unconstitutional title of First Lady ought to respect the laws of the land.

This is not the case in Nigeria whereby the wife of the president has been accused of appropriating official executive functions and the elected members of the people’s National Assembly seem helpless to restore constitutionalism in the way and manner that Nigeria’s President's wife has gone about as if to say the office is fully recognized by the constitution of the country. A respected national paper in Nigeria recently upbraided Mrs. Patience Jonathan for some of these 'high profile official' functions.

But how does the wife of the United States President go about her unofficial duties of the first lady?

Observers can see that the first lady of the United States has shown the highest charisma in speaking out for educational empowerment of the girl child and she accompanied her husband in the ongoing African visits whereby she was seen in an all girls College in Senegal counseling the girls to say no to rape and to consistently pursue their studies.

This reminds me of the stark reality of high rate of sexual violations of youngsters by adults in Nigeria and the silence of the wife of the Nigerian President to play a role towards ensuring that government fights the menace of the hydraheaded monster of rape.

Although, on paper the offence of rape is seen as grave but the weak enforcement of the law has made it impossible for those sexual violators of young children to face the full weight of the law.

Legal scholars note that both Nigerian criminal codes define rape in similar terms. In southern Nigeria, the Criminal Code defines rape as "unlawful carnal knowledge of a woman or a girl, without her consent." Unlawful intercourse with a woman's consent also constitutes rape if the consent is obtained in any of the following ways: by force or threats or intimidation of any kind; by means of false and fraudulent representation as to the nature of the act; or in the case of a married woman, by impersonating her husband.

Similarly, law experts recall that the Penal Code, applicable in northern Nigeria, defines rape in the same manner. However, it provides that "[s]exual intercourse by a man with his own wife is not rape, if she has attained to puberty."

Both criminal codes impose the same punishment for rape, which is imprisonment for life, with or without caning even as the charge of attempted rape is punishable by 14 years of imprisonment but not many offenders get punished because of the mode of obtaining evidence to pin down these sexual predators and because the law of evidence in matters of rape make it impossible for the anonymity of the victims to be concealed because of the stigma attached to the appellation of a rape victim in Nigeria.

Nigerian criminal law addresses a number of sexual offenses, so says law scholars. The Penal Code imposes strict penalties for such crimes as "procuration" of a minor girl; importation of a girl from a foreign country with the intent that she may be "forced or seduced to illicit intercourse" with another person, and employment of a minor for prostitution. Nigeria also has the anti-human trafficking law and also an agency to combat human trafficking. These mechanisms are not effectively monitored to ensure that rape offenders are punished.

In addition, the Criminal Code provides for life imprisonment for any person who has unlawful "carnal knowledge" of a girl under the age of 13 but most Nigerians are aware, early marriages is a notorious practice in a part of the country and these sex predators are left to repeatedly rape these young girls in the name of marriage.

A national voice like that of the wife of the President of Nigeria may influence officials of government to more seriously take their jobs serious to fight and minimize the damage unleashed by sex predators of youngsters.

If the Nigerian first lady can devote one third of all her public speeches and events to advocate an end to the phenomenal rise in rape, then the necessary mechanism for effectively enforcing strong law against rape would be activated.

The sordid fact is that scientists and researchers have stumbled on shocking statistics regarding rape of teenagers in Nigeria.

From www.ageofconsent.com, the following facts emerged; “7 out of every 10 males and 5 out of every 10 females attending secondary school in Nigeria are sexually active or have had sexual relations at least, once.

Another finding is that;“Two out of every 5 secondary school girls interviewed admitted to at least one previous pregnancy. Over 900,000 births to adolescents occur annually and 150 out of every 1000 women who give birth in Nigeria are 19 years old and under”.

Also discovered is that “Eighty percent of patients at Nigerian Hospitals with abortion-related complications are adolescent girls. These complications include hemorrhage, septicemia, perforated uterus, secondary sterility and in many cases, death. Illegally induced abortion is described as a school girls' problem in Nigeria”.

But from far away Senegal, the American first lady gave us a good lesson on how to play a good role model for the younger girls when she visited them in their secondary school, interacted with them meaningfully and offered words of encouragement.

The voice of America, a radio station listened to by about 60 million rural Africans, reported yesterday that hundreds of students at the all-girls Martin Luther King high school danced and sang to welcome Michelle Obama.

Mrs. Obama praised the students for their academic achievements and urged them to stick with it, even though she said she knows it is hard for some families to afford to send their daughters to school.

UNESCO reports that just 27 percent of students in Senegal's secondary schools are girls. Many girls, particularly those in rural areas, are forced to drop out to care for their siblings and help with housework.

Mrs. Obama said she knows about sacrifice. Her father struggled to pay for her education.

"That’s why, day after day, I made sure I did everything in my power to make him proud," she said. "So I got up early to study. I stayed up late doing my homework. And despite my efforts, there were still plenty of people who doubted whether a girl from my humble background had what it took to succeed."

Student Safietou Mboup said she and her friends were very happy to hear Mrs. Obama speak. She said they really understood Mrs. Obama's message and that all the girls will continue to work hard.

Mrs. Obama shook the girl's hands and hugged many of them as she left.

The Port Harcourt ‘near-invasion’ of Nigeria’s first lady and the Senegal’s friendly visit by the United States President’s wife, show us that though the two ladies share same title, but both operate different styles and ironically both are black women.