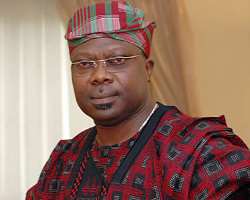 SAN FRANCISCO, June 28, (THEWILL) – The Independent National Electoral Commission (INEC), Friday, faulted the claim by a Peoples Democratic Party (PDP) governorship aspirant in Osun State, Senator Iyiola Omisore, that the Chairman of INEC, Professor Attahiru Jega, was in defiance of a court order removing Ambassador Rufus Akeju as the Resident Electoral Commissioner (REC) for Osun State, maintaining that there was no such order.

Omisore, in recent media interviews, had alleged that Jega had failed to carry out a court order that Ambassador Akeju be removed as the Osun State REC.

But in a letter sent to the Editor of Nigerian Tribune by the Chief Press Secretary to INEC Chairman, Kayode Robert Idowu, the electoral body saidthere was no subsisting court order against Ambassador Akeju as Osun State REC.

The letter read: “Permit me to respond to a repeated claim by notable politician, Senator Iyiola Omisore, that the Chairman of the Independent National Electoral Commission (INEC), Professor Attahiru Jega, is in defiance of a court order removing Ambassador Rufus Akeju as the Resident Electoral Commissioner (REC) for Osun State.

“The politician restated this allegation in an interview published on pages 39 & 40 of your newspaper on Thursday, June 27, 2013. In that interview, he claimed, as in previous ones (for instance, in Sunday Vanguard on April 28, 2013), that a court has restrained INEC from recognising Mr. Akeju as REC, but that the Chairman persists in defiance of that order by failing to remove the REC.

“Ordinarily INEC, as a neutral umpire, would not want to take issue with political partisans of whatever inclination. But because the Commission’s silence may be mistaken by the unwary public as a proof of veracity of Senator Omisore’s claim, it has become imperative to make clear that there is no subsisting court order against Ambassador Akeju as Osun State REC.

“True, in a ruling on 23rd March, 2011 by the Federal High Court in Oshogbo, Hon. Justice Babs Kuewumi gave an interlocutory order of injunction restraining INEC from recognising the REC pending the hearing and determination of the Originating Summons in the suit. But the Commission’s lawyers lodged an appeal and filed a Motion for stay of execution of the interlocutory order. This appeal is still pending before the Court of Appeal in Akure.

“Let me reaffirm that INEC is a law-abiding organisation and does not defy valid court orders. The Commission is guided by provisions of the Law and strives to do the right thing always. Politicians, and indeed all Nigerians, are urged to be likewise disposed – for the good health of our democracy.”