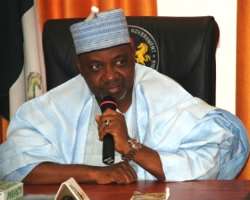 ...Sets Up Committee to Tackle Oil Theft
SAN FRANCISCO, June 27, (THEWILL) – The funding for the proposed reform of the Nigeria Police (NP) has been slashed by a whopping N1.3 trillion as the National Executive Council (NEC), at its meeting on Thursday , approved N1.5 trillion instead of the N2.8trillion recommended for the reform by a Presidential Committee headed by the immediate past chairman of the Police Service Commission (PSC), Parry Osayande.

The bi-monthly NEC meeting chaired by Vice President Namadi Sambo also approved the establishment of a 10-man committee on oil theft to be chaired by Governor Emmanuel Uduaghan of Delta State and looked at the challenge posed by out-of-school children. Other issues discussed at the meeting included the offer of sale of fairly used computers to states and the release of a document on early warning on flood to states by the Federal Government.

The Osayande Committee had also recommended an extension in the timeframe for the police reform from five to six years to ensure Federal Government’s commitment to the transformation of the Police for effective security service delivery.

Speaking further on the recommendations, Governor Peter Obi of Anambra State, as well as Niger State governor, Mu’azu Babangida Aliyu ; Governor Murtala Nyako of Adamawa State; the Inspector General of Police, Muhammad Abubakar; and Minister of National Planning, Dr Shamsudeen Usman; Minister of Police Affairs, Navy Captain Caleb Olubolade (rtd); as well as Minister of State for Finance, Dr Yerima Ngama, said the Committee also recommended that a joint funding of the revised cost of should come from the three tiers of government in equity share of 60 per cent each to be borne by the tiers of government ‘‘while the Organised Private Sector (OPS) and International Development Partners will contribute 40 per cent.’’

According to Governor Obi, ‘‘The Council welcomed the proposals and also threw its weight behind the recommendations for a statutory funding of the Police Reform Programme in line with the provisions of the Constitution.’’

He disclosed that NEC concurred that there is the need ‘‘to provide extra funding for the police’’ pointing out that one percent first line charge, should be deducted from source during the revenue allocation and that ‘‘funds deducted would be used exclusively in the state.’’

And coming few days after President Goodluck Jonathan had a closed door session with stakeholders in the oil and gas sector on the problem of oil theft in the country, the Federal Government yesterday set up a 10-man committee under the chairmanship of Delta State governor, Emmanuel Uduaghan.

Members of the committee, which is expected to report back to NEC at its next meeting has the governors of Bayelsa, Seriake Dickson; Rivers, Chibuike Rotimi Amaechi; Cross River, Liyel Imoke; Akwa Ibom, Godswill Akpabio; Edo, Adams Oshiomhole and Ondo States, Olusegun Mimiko, as members.

Other members are the Coordinating Minister of the Economy (CME) and Minister of Finance, Dr Ngozi Okonjo-Iweala; the Minister of National Planning, Dr Shamsudeen Usman; and his petroleum counterpart, Mrs Diezani Allison-Madueke.

Adamawa State governor, Alhaji Murtala Nyako, said the committee was established to draw up a road map for the government in its resolve to tackle this problem.

A post-NEC document indicated that the council ‘‘acknowledged the efforts being made by the Federal, some State Governments and the security agencies towards combating the scourge.”

The council also noted that there is ‘‘the need for enhanced collaboration among the affected States, security agencies and the Federal Government to address all administrative hurdles towards combating the menace.’’

Nyako disclosed further that the ‘‘committee is to holistically assess the challenge and draw up a roadmap to guide further actions that would be taken by NEC towards finding a lasting solution to the problem.

Speaking on the menace of out-of-school children, Gov. Aliyu stated that the Coordinating Minister of the Economy, Dr. Okonjo-Iweala, and the Minister of Education, Prof. Ruqayyatu Rufa’I, presented a memorandum to the Council on how to address the challenge.

‘‘The paper highlighted the Government’s efforts at improving access and quality of education, as well as meeting the international education goals such as the MDGs and Education for All (EFA),’’ he said.

The paper also identified the following as areas needing support: campaign on access to encourage enrolment, construction and rehabilitation of schools as well as provision of teaching-learning-support materials.

Other areas are: teachers’ recruitment, training and incentives, promoting community involvement in the management of education to enhance quality and promoting the participation of youths and adults in Technical and Vocational Education Training (TVET).

According to Aliyu, ‘‘the Council commended the State Governors for agreeing to accelerate the drive to address the challenge of Out-of-School Children and adopted that implementation machinery to take advantage of aid from the Nigerian business community, UN Education First initiative and the Global Business Coalition on Education, should be put in place at State levels.”

The NEC also adopted the need to support the concentration of intervention on the provision/rehabilitation of infrastructure, teacher training, TVET, and community participation and the design an action plan to outline strategies to improve and meet the MDGs by 2015.

In addition, the council drummed support for adults and youths in developing Small and Medium Enterprises while directing the minister of Education and the State Commissioners for education to jointly work out broad guidelines on the implementation of the recommendations.

A post-NEC document showed that ‘‘the NEC sub-committee on the Negotiations for the 78,701 Direct Data Capture Machines (DDCM) offered for sale to states by the Independent National Electoral Commission (INEC) led by Governor Ibrahim Dankwambo of Gombe State,’’ presented its report to the council.

According to the document, the state governors and INEC agreed that there should be a 10 per cent discount for the new computers and 25 per cent for the fairly used ones from the offer price of N35,000 and N20,000 respectively.

Both parties also agreed that a six months payment period backed by the issuance of ISPO should be observed and that the computers should be delivered at the State INEC Offices.

‘‘The Council welcomed the terms of the agreement and advised interested states to take advantage of the offer as a means of promoting computer literacy in secondary schools,’’ the document further added.