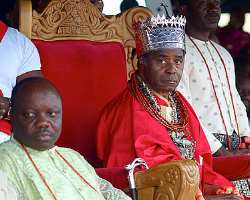 SAN FRANCISCO, June 26, (THEWILL) – The Delta State governor, Dr. Emmanuel Uduaghan, has been commended for his policy which seeks to identify alternative sources of revenues to the state instead of over-dependence on oil.

Commending the policy, tagged Delta Beyond Oil (DBO), when members of the State Board of Internal Revenue (DBIR) paid him a courtesy visit at his palace in Warri, the paramount ruler of Warri Kingdom, His Royal Majesty, Ogiame Atuwatse II, the Olu of Warri, noted that the initiative will help Nigeria start the process of diversifying her economy if it eventually comes to fruition as he promised to rally support for the policy.

“The DBO vision remains one of the best things that have happened to the state as we all knew what happened during the colonial era where regions survived independently through revenues generated within.

"The regions were run without oil money before the advent of oil, but since exploration started things seem to have fallen apart. States became weaker and nobody is doing anything to restate the initiatives which helped of regions to generate revenues from other sources.

"Absent of this has led to mass unemployment as the money coming from federal allocation is not able to meet the needs of the people. If we diversify into areas like agriculture and other natural resources, job will be available for our youths," he said.

Maintaining that the vision of the Delta State Government is a well thought-out initiative that will right the wrong stance of successive administrations in the country which abandoned sources of revenues before the advent of oil, the monarch lauded the state government for its efforts at building critical infrastructure for the vision to vigorously take off.

He then promised to support the DBO vision, stressing that as the custodian of culture and tradition, the palace would assist in disseminating the information on the need for the people to pay their taxes.

In an earlier remark, the Executive Chairman, DBIR, Hon. Joel-Onowakpo, disclosed that the visit was to intimate the monarch on the vision of the policy and how the state government intends to actualise it.

The DBIR boss said the DBO is a policy vision that would ensure that the State depends less on oil revenues, saying "This is necessitated as a result of the challenges that characterised oil and the need for more revenue to pilot development."

According to Joel-Onowakpo, "One source of income is risky because if anything bad happens, the state will be thrown into problem and to avoid this, the state is building infrastructure to be able to pursue the vision.

"The airport and roads will open up the state to the world. Agriculture will lead to employment generation and will also have enough revenue for the state which will lead to more money for development.

"Today, our mass transit is the best and cheapest in the country. DBO has the singular objective of expanding the tax base of the state."

While explaining that the Uduaghan's administration has laid the solid foundations for the state to guarantee the sustainable development of every nook and crannies of the states for the overall benefit of the citizenry, the DBIR boss expressed gratitude to the monarch over his support for government’s policies all this years. He also urged residents of the state to support the policy in order to sustain it even beyond the Uduaghan's administration.