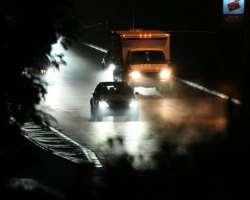 Abuja Feb 24, (THEWILL) – President Umaru Yar'Adua was driven into the villa compound this morning at about 4.a.m in a Ford E-250 in a convoy of about 15 vehicles.

As early as 8.30 a.m. Ministers, journalists and aides started arriving for the usual Wednesday executive council meeting. By 11 a.m. the chamber was soaked with tension and talks because of the obvious friction between the Acting President's team and Yar'Adua's. Yar'Adua's officers would not allow Jonathan convene the meeting in his capacity as Acting President. Infact, one of Yar'Adua's officers was stationed behind the seat of President and Commander-in-Chief.

Secretary to the Government of the Federation Alhaji Yayale Ahmed who was among the six-member delegates sent to Saudi Arabia by the Council last week to visit the ailing Yar'Adua walked into the council chamber at about 12 noon to announce the cancelation of the meeting. Yayale was the only member of the delegation that was at the villa for the meeting.

He said the directive to cancel came from Acting president Jonathan asking the ministers to return back to their offices and reconvene at Jonathan's conference room at 2.00pm, while also stressing that the meeting was compulsory.

"Ladies and gentlemen, I want to inform you that the Acting President has canceled the meeting. He has directed all ministers to attend a special meeting in his conference room. The meeting is mandatory to all ministers," Yayale said.

Head of Service Dr. Steve Oronsanya was seen shuttling between the Council Chambers and the Akinola Aguda residence of Acting president Goodluck Jonathan obviously trying to persuade Jonathan to convene the meeting. He was overhead discussing with Information Minister Dora Akunyili and Solid Minerals Minister Mrs. Dezieani Madueke on why Jonathan should convene and chair the meeting but the women argued against it.

Professor Akunyili was cornered by correspondents after her exchange with Oronsanye:

Correspondents: Did you know that the President has returned to the country?

Akunyili: I heard it on CNN
Correspondents: Now that the President is back, what happens to the Acting President?

Akunyili: The important thing for Nigerians is to pray for the quick recovery of the President and not worry about the Acting President.

Correspondents: Does that mean that the President has not recovered fully?

Akunyili: I am not a medical doctor.
Meanwhile when the meeting held by 2.00pm, it lasted for just about 10 minutes.

Addressing State House Correspondents at the end of the meeting Information and Communication Minister Professor Dora Akunyili said Jonathan informed them that he would be meeting with wife of the President, Hajia Turai Yaradua later this night to get more information on the president's health adding that Jonathan said he was only informed this morning by the president's aides that he returned early this morning.

"He invited us for a meeting in his meeting room at 2pm and when we came he told us that the president has returned, he has been briefed by the aides of Mr. President and that he hopes to see the wife of the president this evening and that when we meet next week, we will be briefed on the outcome of the Saudi trip by the members of council.  And that when he is eventually briefed by our president he will call us again."

As early as 9.45am some of the ministers had started arriving for the meeting, which usually commenced at 10.00am.

For supporters of Yar'Adua, it was dancing and smiles at the villa. They put up smiles during exchanges with their colleagues even though it was obvious they were fake smiles.

FCT Minister, Adamu Aliero who came late for the meeting was seen jumping and smiling while he hugged the president's CSO, Yusuf Tilde and ADC, Onoveyita.

ADC to the president Mustapha Onoyiveta was also full of smiles as he was heard telling some reporters, "We are back, we are back," but pleaded with them to leave him out of the drama when photographers moved in to take photographs of him while he chatted with reporters.

The president's spokesman was seen moving from his office to the president's office clutching a file just before he issued a statement on behalf of the ailing president.

Ministers were also seen in groups discussing the current event and the implications for the country.

Jonathan left his office for his residence immediately after the meeting with the Ministers.