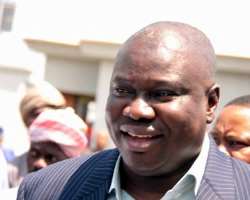 SPEAKER OF THE LAGOS STATE HOUSE OF ASSEMBLY, ADEYEMI IKUFORIJI
Listen to article

LAGOS, June 24, (THEWILL) – The Speaker of the Lagos State House of Assembly, Rt. Hon. Adeyemi Ikuforiji and his Personal Assistant, Mr. Oyebode Atoyebi, were Monday granted bail in the sum of N1B each by Justice Ibrahim Buba of the Federal High Court, Lagos, in the N273 million naira money laundering charge brought against them by the Economic and Financial Crimes Commission (EFCC).

Justice Buba also gave them a 48 hours deadline to post the bail bond or face arrest and detention.

The bail condition also includes two sureties each for both men in the sum of N5m. They are to swear to an affidavit of means.

Both men were re-arraigned today before the court where they pleaded not guilty to the amended 54-count charge punishable under Sections 18(A) and Section 16(2)(B) of the Money laundering (Prohibition) Act 2011.

Justice Buba has set September 25, 2013, as date for commence of their trial.

Ikuforiji and Atoyebi are free and presently not being detained by the EFCC.