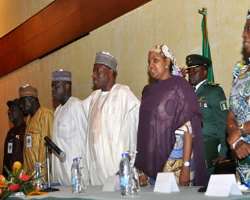 SAN FRANCISCO, June 24, (THEWILL) – President Goodluck Jonathan, Sunday night, in Yaounde, Cameroun, said the desire to save the lives of thousands of Nigerians living in Bakassi explained why Nigeria did not appeal the 2002 ruling of the International Court of Justice (ICJ) which ceded the oil-rich Peninsula to Cameroon.

According to Jonathan, "we had no new evidence within the period of time that was given that will make a difference in the judgement,” even as he advised that Nigerians living in Cameroun "should live a good and decent life," adding " The forces of animosity are gradually dying down and the relationship is improving."

He however assured that the Federal Government was doing everything to improve the welfare of all Nigerians whereever they may be.

Jonathan, who also assured that he would table all their complaints before the Camerounian President, Paul Biya, urged them to ignore negative reports that tend to exaggerate the problems back home.

Listing his administration's achievements to include the successes chalked in the areas of provision of road infrastructure and agricultural development, President Jonathan said some challenges still remain in the health sector.

He said though he made a call for voting right for Nigerians in the diaspora,only the amendment of the Constitution can guarantee it.

" I cannot use executive fiat to do it, we have to follow the constitution. We have a very vibrant diaspora and should be heard. You should send your petition to the National Assembly so that they will know it is not only Mr. President that is interested in it," Jonathan said.

The President, who also admitted that insecurity still remain a challenge, said with the efforts of the Joint Task Force (JTF) it may not take the six months constitutionally backed to bring the insurgents under control and lift the state of emergency in Adamawa, Borno and Yobe States.

The Nigerian community also expressed their fears over the activities of pirates on Nigerian territorial waters , the frustrations in getting the e-passport, all of which the government promised to respond quickly and address them.

In her remarks, the Nigerian High Commissioner to Cameroon, Hadiza Mustapha, said the Nigerian community "is the best community any ambassador could ask for."

Describing them as hardworking, patriotic, law-abiding and with good working relations with the Mission", she said "so far, we have no reason to doubt the commitment of our host government to address the issues of harassment on Nigerian citizens by Cameroonian gendarmes."

President of the Nigerian Union, Center Region, Ebere Valentine, assured the President that Nigerians in Cameroon will continue to become good ambassadors and "project the image of our country well.

He appealed for more government involvement in the welfare of Nigerians in Cameroon as regards the cost of residence permit, saying 50 per cent reduction will be a welcome development".

This is as the representative of Nigerians in the corporate sector in Cameroon,Olukorede Adenowo, who is also the Managing Director, Standard Chartered Bank, West and Central Africa, said: "We have been instrumental in working with our High Commission in bringing in several Nigerian businesses and helping them find their feet in Cameroon. We Nigerian professionals are ready and available to do more."