At Last, EFCC Detains Kenny Martins After A Dramatic Chase 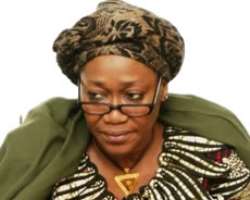 San Francisco Feb 25, (THEWILL) - It was drama at the premises of the Federal High Court, Maitama in Abuja when operatives of the Economic and Financial Crimes Commission (EFCC) arrested former chairman of the Police Equipment Fund (PEF), Mr. Kenny Martins.

Martins was picked up at 5pm WAT after operatives got information that he was at the court for another matter not related to the one the EFCC is prosecuting him for.

His arrest is sequel to a bench warrant issued by a Federal Capital Territory (FCT) High Court on February 12, 2010. Martins, Ibrahim Dumuje, Joni Icheka, and Cosmas Okpara are being prosecuted for their role in the forgery of Corporate Affairs Commission (CAC) documents that facilitated a N7billion fraud at PEF.

Operatives of the anti-graft agency had gone to Martins' residence at about 10 a.m. this morning to effect his arrest but he got wind of his arrest and escaped before the operatives could get to him.

Luck however ran out for him when operatives got an intelligence report an hour later that he was at the Federal High Court for a matter. The officers mobilized men to the location arriving just as Martins' was about entering his vehicle. On seeing the operatives, the politician-cum-fugitive ran back into one of the court offices to hide. This prompted the commission to scrambled more men to the premises to effectively cordon off the entire perimeter of the compound.

Martin remained in hiding from about 11a.m. till 5 p.m. when he voluntarily surrendered for fear of being locked inside his hideout by court officials who were ready to close for the day. He was subsequently handcuffed and taken into custody by the commission.

EFCC's spokesman Femi Babafemi confirmed the incident in a conference call adding that Martins is being held at the commission's facility and would be taken to court on Monday.