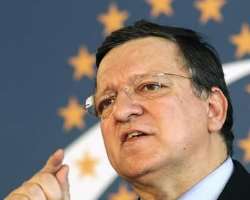 It seemed like a bright idea at the time.
By linking the choice of president of the executive European Commission to the European Parliament elections in the 2009 Lisbon Treaty, EU leaders hoped to reverse rising abstentionism and overcome Europe's widely bemoaned "democratic deficit".

If voters around the soon-to-be-28-nation European Union were given a real policy choice personified by a single candidate, they would identify more easily with "Europe" and vote in greater numbers, the theory went.

That in turn would give greater legitimacy to the European Commission, which proposes and enforces EU laws but which critics often denigrate as unelected and undemocratic.

"For the first time these could be genuine 'European' elections, the outcome of which will shape European politics for at least the next five years," said Simon Hix, professor of European governance at the London School of Economics.

"It will be the first time we, as European citizens, can choose who holds the most powerful executive office in the EU."

Well maybe, but maybe not.
With less than a year to go until the May vote, the pitfalls of the new system are becoming clear as Europe seeks a successor to Jose Manuel Barroso, the center-right former Portuguese Prime Minister who has been in the hot seat since 2005.

For one thing, an election traditionally used to register a protest vote against national governments may for the first time be used to deliver an almighty kicking to Europe itself.

EU leaders are anxious at the prospect of an unprecedented wave of Euroskeptical lawmakers being swept into the unloved parliament on a tide of anger over mass unemployment, economic stagnation and austerity measures.

As Mark Leonard and Jose Ignacio Torreblanca of the European Council on Foreign Relations argued in a paper on the rise of continental Euroskepticism, many voters feel the EU's increasing dominance of national economic policy in the crisis means they can change government but they can't change policy any more.

"To an increasing number of citizens in southern European countries, the EU looks like the International Monetary Fund did in Latin America: a golden straitjacket that is squeezing the space for national politics and emptying their national democracies of content," they wrote.

In countries such as France, Britain, Italy, Greece and the Netherlands, opinion polls suggest as much as a third of the vote may go to anti-EU populists and parties of the nationalist far right or the hard left.

That could make it harder to assemble an absolute majority to elect the next Commission president, who will be proposed by EU leaders "taking into account the elections to the European Parliament and after having held the appropriate consultations".

It may also be deterring top talents from seeking the job. So far, there is little sign of A-list European leaders stepping forward to vie for their political family's nomination.

Three prime ministers seen as potential candidates for the center-right European People's Party, the biggest bloc in the current EU legislature, have taken themselves out of the race.

Donald Tusk of Poland, Jyrki Katainen of Finland and Fredrik Reinfeldt of Sweden all opted to stay in national politics.

One serving national leader, speaking on condition of anonymity, outlined why the new system makes it unattractive for incumbents to seek the Commission presidency.

"I imagine the parties will decide on their candidates in January/February. What happens if the candidate is a prime minister? Can he go on running his country as normal while waging a Europe-wide campaign?" he asked.

"What happens then if his party is not the biggest? Can he simply carry on as prime minister?"

That may leave Europe's largest political family having to nominate a second-ranking figure as its candidate.

Among those mentioned are two serving European commissioners - Viviane Reding of Luxembourg and Michel Barnier of France - and one former member, Lithuanian President Dalia Grybauskaite. None is a crowd-pulling household name.

One big name touted by some is International Monetary Fund chief Christine Lagarde, a French conservative. But it's not clear that a Socialist French government would nominate her and she is involved in a legal case that may cloud her future.

The Socialists, the second biggest grouping, seem likely to make European Parliament President Martin Schulz, 57, a German Social Democrat, their champion. Schulz has been campaigning for months and no serious rival has arisen so far.

But while the bearded former bookshop owner is a familiar figure in Brussels, having spent almost his entire political career in the EU legislature, he lacks government or economic experience.

Not widely known even at home, his main claim to fame was a public clash in 2003 with then Italian Prime Minister Silvio Berlusconi, who caused offence by comparing him to a Nazi concentration camp "kapo".

Although Schulz speaks fluent French and English, his nationality may be a handicap with voters in France, Britain and the peripheral countries of the euro zone, where Germany is associated with harsh austerity policies.

If the German Social Democrats end up in a grand coalition with Chancellor Angela Merkel's conservatives after a September general election, it will be hard for Schulz to campaign as an alternative to her policies. f Merkel's center-right coalition is re-elected, Berlin may not wish to nominate him as its candidate for the European Commission, barring his path.

The center-right liberals, the third largest parliamentary group, seem set to pick former Belgian Prime Minister Guy Verhofstadt, 60, whose Franco-German-backed bid to be Commission president in 2004 was torpedoed by Britain and its allies. Many EU governments see him as too much of a federalist.

The Greens are to hold an online ballot to pick a standard-bearer, having lost their most charismatic leader, Daniel Cohn-Bendit, 67, who is standing down from the European Parliament.

One intriguing outsider whose name is on many lips is former Italian Prime Minister Mario Monti, 70, the ultimate EU insider.

A respected economist who has been European commissioner for competition and the internal market, Monti led a technocratic government that pulled Italy back from the brink of collapse in 2011. He enacted some tough reforms and austerity measures but was heavily defeated in a general election in February.

Moreover, his centrist Civic Choice party is not a member of any EU political family, and Berlusconi, who toppled his government, might try to block an EPP move to draft him.

So while the notion of introducing more democracy into the choice of the European Commission chief was seductive, it may turn out to be what the French call "une fause bonne idee" - a dumb bright idea.