When The Ben And Beijing Party Comes To An End 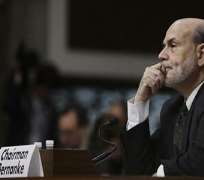 Through the dark days of the financial crisis, and the grey days of the halting recovery that have followed, investors have always been able to count on backing from two sources - Ben Bernanke and Beijing.

They have provided stimulus, mainly by pumping funds into the U.S. and Chinese economies in various ways, when other pillars of support had become unreliable.

That helps to explain why global financial markets took such a beating last week when both signaled that they are getting tired of being leant on so heavily.

Bernanke, the chairman of the U.S. Federal Reserve, set a timetable at last week's Fed meeting for the central bank to reduce the size of its bond buying program with a view to ending it by the middle of next year.

Meanwhile, his counterparts at the People's Bank of China (PBOC) engineered a cash crunch as a warning to overextended banks - and this from a central bank that has previously always provided liquidity when cash conditions tightened.

A lot will now depend on whether this kind of behavior from either hurts the global economy enough to seriously damage the confidence of businesses and consumers, with the resulting fallout for spending, corporate profits, and hiring.

"A trading environment once predicated on free money forever is now being reassessed," said Eric Green, TD Securities' global head of rates research, in a note to clients. The prospects of the Fed stopping its easy money policies "leaves few willing buyers to step in" as prices drop, he said.

In China, a sudden leap in rates for short-term borrowing to record highs should help rein in so-called shadow banking, the lending being done by non-bank institutions, but there is the risk of a miscalculation that could set off a full-blown banking crisis even as the economy is showing fresh signs of slowing.

"It does create a lot of repayment risk within the system between financial institutions and there is potential for unintended consequences," said Charlene Chu, senior director at Fitch Ratings.

Neither the central bank's own economic growth forecasts nor its expectations for continued weak inflation supported a decision just yet to dial back on the $85 billion a month it has been pumping into the financial system, the St. Louis Fed said in explaining Bullard's thinking.

Bullard, who dissented against the decision, wanted "a more prudent approach," that would have meant waiting for clearer signs that weak inflation would rebound.

While Bernanke made it clear that the Fed's actions would depend on whether the economy continues to improve, he based his forecast on expectations that growth will be buoyant enough to bring the U.S. jobless rate down to near 7 percent in a year's time from its current rate of 7.6 percent.

Investors had known the central bank was starting to consider less accommodation, but the level of detail surprised them. So did the return of the Fed to calendar-based guidance on what it intended to do, after months of attempts by Bernanke and other top officials to tie the bond buying, known as quantitative easing, to the economy's performance.

"The average investor is just so dependent on quantitative easing to act as that safety net that, even though it was forewarned, it still came as a shock," said Bruce Bittles, chief investment strategist for brokerage Robert W. Baird & Co.

The big problem is that there isn't much precedent for normalizing an economy that has been artificially supported for so long with low interest rates and a massive injection of funds through bond buying. To say the punch bowl is being removed may be an understatement.

The risk is that there are more major disruptions in financial markets in the next few months as investors pull back for fear of the unknown - and that rising interest rates and a decline in the value of stocks and bonds starts to feed into the real economy as consumers and companies cut back spending.

That could stall the housing market recovery and reduce expectations for retail sales and capital investment, which would quickly feed into lower corporate earnings growth and weaker job creation.

To be sure, on housing and the economy, Bernanke was hopeful last week - saying that people "expect house prices to continue to rise" - and stressing that when interest rates rise for the right reasons, including optimism about the economy, it is "a good thing."

And his credibility remains intact with many.
Bernanke "did a very good job of structuring the runway, saying this is how it's likely to unfold," said William Larkin, fixed income portfolio manager at Salem, Massachusetts-based Cabot Money Management, which has $500 million in assets.

Investors are almost evenly split on whether the Fed will be able to manage the transition to higher rates without doing serious harm to the economy, according to the Wells Fargo/Gallup Investor and Retirement Optimism Index, released on Thursday. Forty-six percent of those surveyed said the Fed will be successful, while 43 percent said the economy will suffer great harm when policy changes.

"Were the economy to stumble, however, history may look back on this meeting as one where the Fed once again jumped the gun in embracing better data," he said.

Given such uncertainty for global markets, the last thing that was needed last week was concern about stability in the Chinese banking system.

The PBOC let short-term interest rates spike to extraordinary levels - the cost of borrowing overnight funds surged to as high as 25 percent for some institutions at one stage - as it refused to inject funds into money markets.

The jitters spread more broadly late last week, amid rumors - passed on by Chinese media outlets - that two major banks had received emergency funds from the PBOC circulated in financial markets in London and New York on Thursday. The lenders denied the rumors, after which money markets calmed somewhat on Friday.

But the episode has added to some wider concerns among investors that the Chinese economy is over-extended, with overall financing rising 52 percent in the first five months of this year compared with the same period in 2012. Of particular concern are big sales of wealth management products that promise investors high returns.

The negative sentiment was reflected in a front-page article in the U.S. financial weekly Barron's this weekend. The headline screamed "China's Looming Credit Crisis" as it spotlighted what it said was reckless borrowing by Chinese companies and local governments.

Given the growing importance in recent years of an earnings stream from China for many large American and European companies any stumble by China could have wider ramifications.

For the current quarter, earnings for companies in the Standard & Poor's 500 index are expected to rise by just 3.2 percent, though they are seen rebounding back above 13 percent for the fourth quarter despite forecasts for negligible sales growth.

However, there are plenty of warning signs. In the run up to the quarterly reporting period, which starts next month, the number of firms in the index lowering their earnings forecasts is outnumbering those raising them by 6.5 to 1 - the weakest outlook ratio since 2001, according to Thomson Reuters data.

On Friday, for example, one of the country's biggest restaurant operators, Darden Restaurants Inc, said higher payroll taxes and gasoline prices were cutting into traffic at its eateries, which include two destinations for the middle class, the Olive Garden and Red Lobster chains.

And while FedEx Corp reported a higher-than-expected quarterly profit on Wednesday, it did so by cutting costs. The company, considered an economic bellwether because of the massive volume of goods it moves around the world, is cutting costs and jobs to adjust to higher demand for less expensive international shipping.

Many companies are finding it difficult to raise prices in the current environment, which can hurt their margins, and reflecting Bullard's concerns about the inflation rate being too low.

And even those who are relatively bullish in one market or another are keeping their expectations very much in check.

"'Down a little' is the new ‘up,' for now anyway," said Doubleline Capital's CEO Jeffrey Gundlach, who is bullish on Treasuries despite last week's worst sell-off in the benchmark 10-year market in more than a decade.