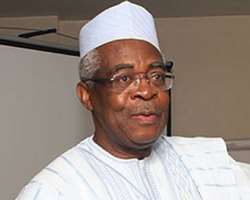 A former Chief of Defence Staff, General Theophilus Yakubu Danjuma (rtd), saturday in Zaria said for the north to regain its political relevance, the region has to put its house in order, just as he enumerated reasons why Arewa has become disorganised.

Speaking after his turbaning as Jarmai of Zazzau, Danjuma said his heart aches when he sees how the once vibrant region of northern Nigeria is becoming the ghost of its former self.

Danjuma, therefore, urged northerners to use wisdom and employ strategies that will be directed by hard work, prayers and planning in their quest to regain their once place of pride in the political equation of Nigeria.

'Our society and economy are in tatters. In a highly competitive world, our children are missing out in getting qualitative and functional education.

'The masses of our people are chained down in dehumanizing and grinding poverty while we continue to maintain few islands of false prosperity in a turbulent ocean of penury and squalor.

'There cannot be peace and harmony where there is wide disparity between the few rich and a multitude of the poor.

'Nigeria, and indeed northern Nigeria, has never been in short supply of politicians scheming and screaming for due and undue advantages.

'What has been in short supply are patriotic elder statesmen who will use their experience and wisdom to give our country a clear sense of purpose and direction.

'When elders become decadent, the youth are bound to become delinquent. Our people are confused and perplexed; they've become like flock scattered on many hills without a shepherd.

'This is clear indication of leadership failure,' Danjuma said.

He called on all to work hard in order to bring the north, and Nigeria in general, to the right track.

'We urgently need to put our house in order so we can overcome our various challenges.

'This is the time for elders to be circumspect and temperate in their utterances. It's not in our character as northerners to talk too much.

'We need to think more, pray more, plan more, work harder, relate better, but talk less.  Battles are better fought and won through wisdom and strategy than through inflammable pronouncements and political tantrums.'

While expressing his gratitude over the conferment of the Jarmai title, Danjuma went memory lane in recapping why the ancient city of Zaria became the home of most northern Christian leaders.

'Zaria has distinguished itself as a beacon of religious tolerance, peaceful coexistence and educational advancement. Zaria was one of the few northern cities that first opened its gates to pioneer missionaries in northern Nigeria, which is why Wusasa has become the second home of many northern Christian leaders.

In his remark, the Emir of Zazzau, Alhaji Shehu Idris, said Danjuma's contribution to the development of agriculture, education, economy, industry, national security, among others, informed the decision of Zazzau emirate to confer the Jarmai title on the elder statesman.

Alhaji Idris urged Danjuma to intervene in bringing the perennial water problem bedevilling Zaria for decades to an end.

The emir also urged him to establish fertilizer and agro-allied industry in Zaria in order to boost agriculture and food production.