KILLING FOR ISLAM ON LONDON STREETS AND ONE NIGERIA 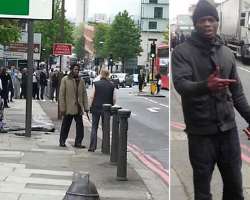 In the afternoon of May 22, 2013 on a busy Woolwich street in the Southeast of London, United Kingdom a gory and disturbing scene was enacted. Pedestrians were passing up and down the streets. And suddenly, in the clear view of these people; men, women and children this ghoulish, inhuman and horrific real life movie began to unfold. Two Nigerians Michael Adebolajo 28 and Michael Adebowale 22 driving a car intentionally knocked Lee Rigby a serving British soldier to the pavement. Then the two quickly stopped their car, ran out shouting “Allahu Akbar” (Arabic phrase for God is great), hacked, carved and mutilated the unsuspecting and bewildered soldier right there in the view of a horrified and disbelieving public.


Judging from the circumstantial evidences anyone would assume that every action of the Nigerians was premeditated and choreographed beforehand. The Nigerians left home with knives, meat cleaver and a revolver, and from all indications merely executed previously rehashed details of a hate script that had been written before that day. With that act the two Nigerians etched on the minds of the disgusted spectators a terrible spectacle that is sure to live vividly on the people’s memory for the rest of their lives.


Adebolajo and Adebowale are part of the international Nigerian Islamic jihadist network whose numbers are growing and spreading rapidly. The two were indoctrinated, armed and were on “revenge” mission to kill Christian British citizens and other Christians everywhere for Islam. This jihad mission was later explained so remorselessly before a camera by Adebolajo whose other name is Mujaahid Abu Hamza. He said that they did the killing for Islam and promised that more of such attacks will come. In his own words: “. . . we swear by the almighty Allah we will never stop fighting you until you leave us alone. So what if we want to live by the Sharia in Muslim lands? Why does that mean you must follow us and chase us . . . leave our lands and you will live in peace."


We are going to look at this May 22, 2013 London incident as it connects with the existence of one Nigeria. Because Nigeria exists in its present form its connection with various international Islamic terrorist acts will continue to grow stronger and more deadly. Therefore, it is recommended that to find an effective solution to the increasing involvement of Nigerians in Islamic terrorism around the world, Adebolajo’s explanation of their reason for the killing would have to be looked at closely and taken as reference point by terrorist experts around the world.


Within Nigeria there is a plethora of endemic ethnic conflicts, poverty, political corruption, religious intolerance, genocides, ethnic cleansing and Islamic terrorism and all these and many more are directly linked with the fact that Nigeria still exists as one country. And it is because these internal problems especially terrorism are spilling over to other parts of the world such as the London killing, that Nigeria’s situation can no longer be considered as remote and in isolation by policy makers everywhere. When Adebolajo said; “. . . leave us alone . . . we want to live by the Sharia in Muslim lands. . .” he pointed any interested decision maker in Abuja, London, Washington DC, Paris, Moscow and Beijing in the right direction in solving permanently the threats of terrorism coming from the Nigerian section of the world Islamic terrorist network.


From the onset, Nigeria’s Boko Haram has always emphasized the same fact that they want to be left alone to practice their faith as they choose. The jihadist group, Boko Haram has always justified their killing of Christians, bombing of churches and destroying of government and other symbolic institutional structures in Nigeria with similar words as Adebolajo used. Majority of the people in Islamic north of Nigeria want to be left alone. They want to establish an Islamic state in Northern Nigeria where there is an overwhelming dominant Muslim population. It is incontestable that there has existed in the last 13 years an operational Sharia system in place in the areas they lay claim to.


For anyone who has genuinely and honestly followed the different social and political events in Nigeria it is not difficult to pinpoint the root cause of all the problems emanating from Nigeria today which also threaten world’s peace. The primary source for the threat remains the intolerably hot cultural/religious tensions generated from the result of a one Nigeria. This has led many experts to conclude that once Nigeria is divided that the problem of poverty, social friction, cultural bigotry, religious intolerance and Islamic terror threat to world peace from that part will be taken care of. All events involving Nigerians in acts of Islamic terrorism around the world is a fire that draws its legitimacy and energy from the so-called Nigerian “unity”. And many people who should know better continue to insist that collectively the world can stop feeding the fire by dividing Nigeria immediately along the existing ethnically, culturally and religiously homogenous lines.


In the practical world of politics no one should occupy themselves with analysis for the sake of it, especially when people’s lives are in harm’s way. In a real world practical solutions will always be preferred over any mere fanciful theoretical analysis. And our interest in proffering the division of Nigeria as the answer to Nigeria’s problem is based on that premise. Nigeria’s problem and those of the majority of other countries on the south side of the Sahara will continue to defy solution until all key players agree to redraw the present colonial state boundaries. Every problem remains insurmountable to the extent that the people are unwilling to go to certain lengths, for any reason to work at solving it. Most often the people are only defeated even before they start out by challenges that require less radical solution when they lack the will and sincerity to pursue the honest truth. The current state boundaries of Nigeria and the other African countries are the reasons why there are ethnic, religious, economic, political, social conflicts and debilitating poverty in every African society today. Nigeria will remain poverty stricken, corruption ridden and politically ungovernable until the country is finally divided. Nigeria as is remains an important center for world Islamic terrorism and will remain so for a long time to come. And as long as the country remains united it will continue to not only kill foreigners that travel in the country but foreign arena will become more attractive to more and more radicalized Nigerians. This is what just played out recently on a Woolwich street in London.


A few weeks ago the United States announced a total bounty of $23 million for information leading to the arrest of various important members of Boko Haram hierarchy in Nigeria. The US offer of financial inducement to willing informants is to complement its other overt and clandestine efforts through its Africa Command, AFRICOM in Stuttgart, Germany and other US security agencies that are operating in the area. During the same press announcement it was revealed that US has paid out more than $120 million to 80 people worldwide who had provided useful information that helped to counter terrorist activities. These are useful efforts. U. S., Britain, France and other countries with significant interests and influence in Nigeria can pursue this interim or temporary measure while the details of how Nigeria will be partitioned are being worked out.


The truth however is that in many of the African countries with particular emphasis on Nigeria, this fight against terrorism will become less expensive both in human and material costs when the local authorities can be equipped to take over responsibilities in managing the crisis. Nigerian and other African societies will attain this capacity once they achieve a functional level of socio-cultural coherence where the majority of the population can identify with common interests and goals as a society. But such genuine patriotic allegiance and social responsibility consciousness will remain elusive in the Nigerian enclave so long as Igbo, Hausa and Yoruba peoples continue to be forced into the membership of the same country. There is no cultural, religious or long historical socio-political affinity that exist among these ethnic peoples. It will continue to be a waste of time to continue to believe that a functional country will one day be built from these peoples who have nothing but mutual mortal hatred for one another. The peoples do not need to rely on Western countries to fight their internal terrorists once the country can be divided to reflect the actual ethnic, religious and cultural realities of the peoples that make up present Nigeria.


With several horrific and unsettling incidents such as the December 25, 2005 Nigerian underwear bomber in Detroit, the Woolwich street incident of the Nigerian Islamic butchers, the Korean doctors killed in front of their wives by Islamists in Northern Nigeria, the killing in Sokoto Northwest Nigeria of a British and an Italian construction workers by members of Boko Haram, the murder of the German engineer in Kano, Nigeria by the same Boko Haram group claiming to be working with al Qaida to free some jihadist detainees in Germany, the bombing of United Nations headquarters in Abuja, Nigeria’s capital city by Islamists Boko Haram where 26 people were killed, the world community should urgently consider other options that will be more effective than the current approach to Nigeria. All these terrible incidents and more are connected and can be quickly solved with the same solution: The division of Nigeria. Applying the splitting up of Nigeria to solve the problem of Islamic terrorism and other problems of the country will be similar to what has been done in other places around the world. The most recent example will be Sudan where South Sudan was carved out of Sudan in 2011 to help free the Southerners from Islamic/Arab oppression, clip the economic wings and reduce the wide influence of the Sudanese strongman, Omar al-Bashir. It will be recalled that Sudan as a united country played a vital role in the birthing of what is known today as the worldwide al Qaida network. Sudan as a united country for many years gave sanctuary to al Qaida’s Osama bin Laden, sponsored and nurtured the formative years of his terror organization.


With the most recent incident in Woolwich, London the list of the atrocities of one Nigeria continues to grow longer. Nigeria is already irretrievably gone into the abyss. The solution is to break it up and try to reconstruct everything. The longer the wait the more dangerous the monster gets. Britain created this monster and they must start to take the danger the abnormality is posing to the rest of humanity serious. Next year will mark the 100 year anniversary of the amalgamation of Nigeria’s North and South by the British colonial masters. The various ethnic groups that are forced by the colonial fiat of nation creation have no business existing together as members of the same country and should be separated.