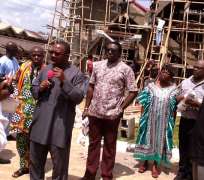 Satisfied with the level of work carried out by army engineers in the reconstruction of internal roads within the Barracks at Onitsha, Governor Peter Obi yesterday presented another cheque of N100 Million Naira to the Army, bringing it to 200 million given to them so far for the project.

Presenting the cheque, the Governor said that it was in line with the policy of his Government to work with all the Federal agencies in the State on the reason that all of them ultimately serve the good of the State and her people. He regretted that before he became Governor, that it was cat and mouse relationship between Anambra Government and Security agencies in the State and that the State suffered because of that. “If you remember, in those reckless era, the State was, in 2004, burnt down. But I can assure you that with the level of civility we have restored, such a thing would not happen again, the Governor said.

Presenting the cheque, Obi urged the army to continue to utilize the funds properly. He said that Government was about collaboration with organizations of goodwill that were willing to make sacrifices for the good of the people. Using the Church as one organization working closely with the State, the Governor said that since schools were returned back to the Church and money given to them directly to rehabilitate the schools, that the State had never been the same again.

The Governor who said that his Government was committed to the upgrade of Onitsha said that besides the roads, that he would be back to the barracks for the rehabilitation of their schools.

Receiving the cheque, the Chief of Army Staff, Gen. Azubuike Ihejirika said he decided to come in person, because the Governor Obi was doing remarkably well for the his State and the Army. He said he had received tremendous support from him since his appointment. Unlike in the past, he said that Anambra State was now enjoying peace under the leadership of Governor Obi. The Chief of Staff commended the Commander of the 302 Artillery Regiment under the Command of Col TA Gagariga, under whom old vehicles were rehabilitated. He assured that his Office would continue to offer support to all military formations in the country.

Besides the presentation of the cheque, the Chief of Army staff extolled president Goodluck Jonathan for his dedication and support to the Nigerian Army. Thereafter, he commissioned some refurbished military vehicles in the Barracks, including Prime Movers, Ammunition Carriers and Command Post Vehicles.

Accompanying the Chief of Staff are the gOC of 82 Division, Gen. AA Olanuyi, the Commander of Corps of Artillery Major General AK Kwaskebe, among others.