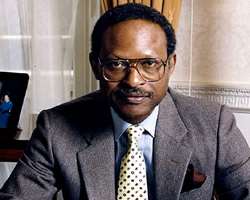 Chief Emeka Anyaoku on Friday in Abuja expressed concern about what he described `the worrisome statements' being made about the 2015 elections by a number of high-profile citizens.

Anyaoku, a former Secretary General of the Commonwealth, made the observation in Abuja on the occasion of a lecture to commemorate the 2013 Nigeria Public Service Day.

'We hear declarations from notable nationals that the president in 2015 must come from a specific area of the country.

'We also hear at the same time from similarly notable nationals that a different area must have its full two terms of eight years.

'In our ethnically and religiously diverse country that is still to cohere fully into one nation, the potential consequences of the failure by either side to win the presidency in 2015 are the grounds for my worry.''

He, therefore, called on politicians and opinion makers to stop and think of the implications for the country's stability of the battle lines for the elections being drawn on sectional and ethnic basis.

Anyaoku, who was the Chairman of the occasion, said, in order to promote national solidarity and entrench democracy, 'our politicians and leaders of thought must move away from section-based to policy-based politics.''

He said that campaigns and advocacy of support for candidates should be based on the manifestos of political parties outlining policies and programmes for addressing the various challenges facing the country and its citizens.

Anyaoku added that competition among individual candidates for political office should be driven by specific pledges of how to serve the various concerns of the electorate rather than sheer quest for position for power.

He also appealed to politicians not to politicise the current 'very serious insecurity challenge confronting the country.''

'Politicisation of the challenge reinforces an environment that conduces to the activities of the Boko Haram.''

Citing similar incidents in the U.S., UK and India in the past, Anyaoku said leaders of political parties and ethno-cultural groups should, in the interest of national security, support the Federal Government's moves to check the excesses of the group.

'The latest killings of 16 students in Borno and Yobe, and the burning of 50 schools should stir our national conscience,'' he said. (NAN)