The ambassador said 240 Nigerian girls were deported in 2012. 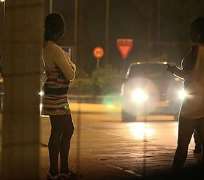 
No fewer than 200 Nigerian girls are trafficked every month to Russia for prostitution, the Nigeria's ambassador to Russia, Asam Asam, has said.
Mr. Asam, who spoke against the backdrop of consular challenges faced by the embassy, disclosed this in an interview with the Europe Correspondent of the News Agency of Nigeria in Berlin.

An investigation revealed that the crime has declined in Western Europe following strict laws on illegal migration, and joint efforts by Nigeria and the governments of those countries to curb the menace.

However, attention has shifted to Eastern Europe as the new destination for the trade.

'The major consular challenge we face in Moscow is the influx of trafficked persons from Nigeria, not less than 200 girls are trafficked every month, and we have so many of them exposed to danger.

'Some are thrown out of the window and treated harshly, there must be a way of stopping these racketeering; these girls are not tourists, students or government officials yet they are given visas from the Russian embassy in Abuja.

'So far we have deported over 240 girls since 2012. You will be shocked at the extent of resistance from the girls; we tell them Russia is not a destination for prostitutes, yet they still come,' Mr. Asam said.

He said the mission tries to curb the menace by arranging deportation exercise for those caught, but the challenges are enormous.

The envoy said such intervention would be more effective at the point of entry, saying 'the strategy is to stop them from Nigeria, and fish out those involved in the trade.'

'For instance a well known Russian human trafficker who has been in the trade for about 20 years was caught in Nigeria.

'The National Agency for the Prohibition of Traffic in Persons( NAPTIP) was on the verge of releasing her before I filed a protest from Moscow to the Comptroller General of Immigration,' Mr. Asama stressed.
He said even the parents of those trafficked encourage their children

'I spoke to the mother of one of the girls and she said her daughter should remain in Moscow and try to survive the ordeal, this is very sad indeed coming from one's parent,' he said.

He tasked the media on sensitising the public on the dangers of trafficking in Russia, saying 'this East European nation has become a new destination for them, and believe me it is a very big crime here.''

Mr. Asam, however, said that other Nigerians who reside in that country were students, and professionals in various fields.