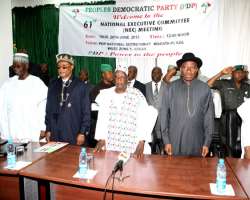 NEC also approved an interim acting National Working Committee (NWC) for the party following the mass resignation of officers who were not properly elected.

NEC, which held its first meeting in over one year, also passed a vote of confidence in President Goodluck Jonathan, declaring that it was evident that Nigeria has made significant progress in many sectors under his leadership.

In the confidence motion moved by Senator Ibrahim Mantu and unanimously adopted by all members of the committee at today’s PDP NEC meeting, the party commended President Jonathan’s “resolute and decisive tackling” of Nigeria’s security challenges which, it said, had curbed terrorism and insurgency in Nigeria, particularly in the North-East geo-political zone.

The PDP also applauded ongoing reforms and development in the country, especially those in the agricultural, aviation, transportation, and education sectors, saying that it was apparent that President Jonathan’s Agenda for National Transformation is being diligently implemented and that Nigerians are better for it.

The party also commended President Jonathan’s strict adherence to the rule of law as well as his protection and defense of the constitution.

“The President is discharging his mandate to the appreciation of Nigerians that overwhelmingly voted for him in the 2011 general elections.

“It is therefore in view of the above that members of the National Executive Committee of our great party do hereby pass a vote of confidence in the President, Commander-In-Chief, Dr. Goodluck Ebele Jonathan, GCFR,” the motion stated.

Members of the new interim acting National Working Committee are